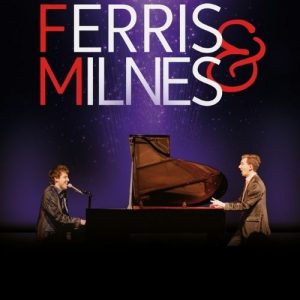 Filing into the west London cultural hub that is the Riverside Studios, I was ready for an evening of song, laughter, and festive cheer. Pulled in by Ferris and Milnes’ medley for Sondheim Society’s 85th birthday gala (and on YouTube) my hopes were high, but I have to confess to departing somewhat disappointed.

Dominic Ferris seated at the gleaming grand piano, and Martin Milnes standing beside, in glittering suits that would make Liberace smile, are both undoubtedly gifted performers at very specific things.

Ferris is a wonderful pianist and pulls off an impressive Frank Sinatra tribute. His rendition of ‘Piano Man’ by Billy Joel is a highlight. Milnes has an incredibly impressive range and is a skilled comic musical performer especially in falsetto. ‘I Could Have Danced All Night (in Soho)’ and ‘Kiss of the Spider Woman’ are again enjoyable interpretations.

Yet the tones of their voices make the harmonies at points uncomfortable even though they are technically correct. The highpoint of the shows is their famous song medleys which are by far the most creative and interesting parts of the evening. A Christmas song medley, the whole of West Side Story and a shuffle through camper pop songs are deeply impressive. Their quick changes, Milnes’ amazing range and Ferris’ darting fingers on the keys could have been a lovely one hour show of musical agility and comedic singing. On this occasion Charlie Kristensen is the special guest with a good voice and confident stage presence well beyond his young years.

But this show was two acts long. The gaps are plugged with uninspiring covers and frankly painful “comedic” skits. The show would work admirably if this were a dinner theatre setting, with food and booze being available throughout the show, people able to tune into what they were interested in or quietly chatter to their neighbour if not. But, for me, two performers, some music hall songs, lovely piano work and some lacklustre attempts at comedy does not an effective show make.