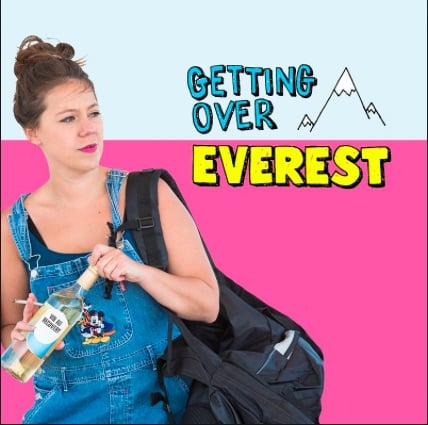 A tale spanning the sheer destructive power of a bad break up, Getting over Everest is a nippy production that is as foul-mouthed and frank as it is funny. However, despite its humour and clever one-liners, it feels as though something is missing.

Following the most recent installment of Bridget Jones’s Diary, we see Libby (played by Natasha Santos) – a lazy, messy girl with the emotional maturity of an unripe mango – make a royal hash of her life. This narrative falls within a similar category to Fleabag, although it is not of the same calibre. The messy girl trope is significant, as is the deconstruction of the bunny boiler and the Courtney Love female – strong, yet flawed. In the past few years, there has been a rise in audiences demanding ‘real women’ to be shown on stage and screen – characters that are imperfect and honest about their sexual experiences. Although Getting over Everest is an amusing example of this, it lacks originality and nuance.

The stage is completely plain, without even an attempt to ground the spectator within a sense of place and time. It feels thoughtless. Also, the choreographed sequences that flit around Libby’s monologues appear sloppy and rather haphazard. Unfortunately, the production is without the proper execution required for it to be an outstanding show. It is hilarious at points and moving at others, but these elements alone are not enough to carry the piece. Is it a shame as this particular narrative is so important within the current sphere, and Getting over Everest seems to abandon this notion with its approach as a zany American comedy. It is almost as if Zooey Deschanel might spring from the shadows, uninvited.

With its childlike humour, this play is a nice deviation from the tear-inducing dramas that overpopulate the fringe circuit. It is reasonably well written, and although a little stereotypical it does bring up moments of true connection with its subject matter. The act of breaking-up is a universal story, and the actors are competent, comically skilled, and work well together within the space. Everything in this production should work, but it seems like a weak link in such an exciting genre of theatre. This is disappointing. Getting over Everest makes a valiant attempt, but unfortunately, never makes it to the summit.

Getting over Everest is playing at The Tristian Bates Theatre