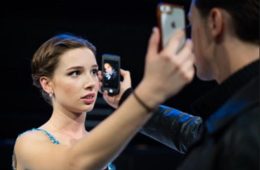 Humour at its darkest and writing at its best, Callum O’Brian’s play Coelacanth drags us to the lowest point of humanity’s fears but somehow makes us laugh about it. In a dystopian future we see death commodified and downloadable, and with this comes all the emotional and moral upheaval you might imagine. The production at The Cockpit might not be doing this wonderful play the justice it deserves, however.

Dark comedy is very hard to write and even harder to put on stage and make work. O’Brien is a masterful writer, but sadly a lot of elements in this production don’t quite execute the play to its full potential. The main culprits are the director and lead performer. The directing (Liz Bacon) is full of simple and basic mistakes; things that shouldn’t be noticed but when they go wrong really distract from the show; easy things to fix if the right thought is put in. Glasses that are still full when lines mention them being finished, bottles of booze clearly visible when they are meant to have run out and record players magically stopping when something dramatic happens. This may be a dark dystopian comedy, but it still has to make sense in a realistic setting, and these simple errors are unacceptable at this level of theatre.

Secondly, the actor playing Yvette (Lizzie Back) just doesn’t quite land the ironic humour and bitterness of the lines, especially in comparison to her co-star. I didn’t really believe her character and although she is clearly a capable actor she floundered a little in the complex script. In her defense, this is her acting debut and talk about a killer of a show to start with? This show asks a lot of a performer and the ability to be both funny, haunted, bright and suicidal all in one character might be a bit much for such a young performer.

Overall, the play is still very enjoyable, however. Some directorial choices are effective, such as using theatre in the round and the constant presence of smartphones The other two actors give very strong performances. Rebecca Camilleri as Yvette’s best friend Rachel is a breath of fresh air, and her energy and pace really save the show that is shuddering along a little before her entrance. Jack Michael Stacey carries the pace the best he can in the early part of the show and pulls off an admirable We Need to Talk about Kevin-type character. The production picks up midway and the speed that is needed is produced as the show ricochets from moment to moment, and this is a wonder to behold. When this production works it really works. Both heartbreakingly funny and sad, with a laugh that makes you want to be sick, this is a mixed bag of a show.

There is a lot of potential for this company and its writer, and while this production didn’t quite manage to be all it could be, I look forward to anything they put out in the future.

Coelacanth was playing at the Cockpit Theatre