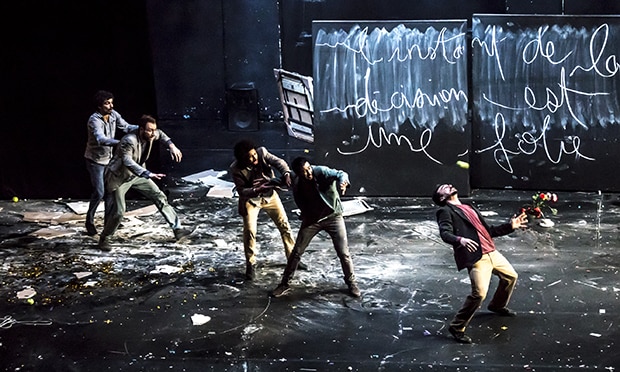 Just at the tail end of the London International Mime Festival is the French company Galactik Ensemble, with their 2017 show Optraken.

Normally (and unfairly) I avoid this wonderful festival, having flashes of white face paint, berets, and deathly silence.

Although equally French, this daredevil, hair-brained comedy is phenomenal and cacophonous.

From the offset, the weirdness and skill are dialled up. A relatively bare staged flanked by two blue old fashion ball machines is framed by a whole roof of white sandbags hanging ominously and swinging slightly.

The start is surreal, slow and deadpan, producing a running giggle from the audience that only builds.

Gaining traction, the mix of incredible acrobatics with a wry sense of humour is a winning combination.

The set, or more precisely, a series of objects seem to be out to humiliate and attack the performers and the show feels like a battle waged against the bodies and safety of those involved.

Moments of silliness offset the cavorting means you are never quite in dropped-jaw awe that a more classic circus instils. This is far more layered don’t you know?!

Stuffed with magical moments aplenty, it’s hard to pick what stands out.

A repeated section where a performer slowly starts shaking and sprays popping fireworks hidden in his clothes and hair while manically smiling is comedic gold.

A personal favourite is a living room scene, where on a slipping fabric the performers and furniture are pushed on and off at various points, all while trying to deliver a speech through a microphone that is on a particularly unruly table.

Part of the set falls on people’s heads, flour douses performers and they are lifted into the air or trapped in plastic bags, balls fly at them from all directions and carnage and confusion reign supreme.

But this is not just The Who trapped in a Holiday Inn – there is method and style behind this madness.

Scrawling ‘the movement of decision as madness’ on a chalkboard and then instantly rubbing it out is an example of this.

The piece takes a slight dip when spoken word is introduced (are there rules for that in the festival?) and the end isn’t quite as hard-hitting as the beginning.

Yet this is nothing in comparison to the brain, brawn and brilliance this show provides.

What a company and what a concept. If all mime is this energetic, sign me up for next year’s festival!