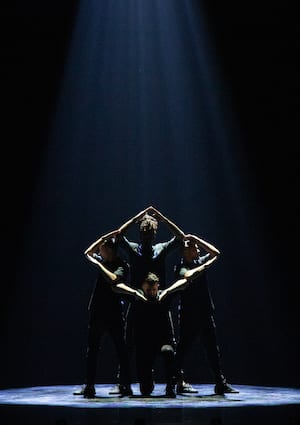 Every year Sadler’s Wells lives up its maxim of focusing and highlighting new and emerging talent with a variety show like no other, and this year is no different. Less knees Up Mother Brown more Swan Lake on acid, Sampled unites the (at times) separate fields of dance, and allows for discussion and appreciation along with some stonking (technical term) dance performances.

Quotes from famous dancers cover the walls and definitions of dance styles lead up the stairs, the air is filled with the sounds of music, youth and excitement. The atmosphere (cliché though it sounds) really is electric.

Each small vignette is prefaced by an introductory video backgrounding the creation of the piece or company. This cleanly separates each piece and allows for some interesting extra information normally relegated to the 5th page of the £7 program.

Everything kicks off with a rather perplexing Jumpstyle piece (a Belgium dance style that looks like river dance but to techno). Although physically demanding TO DA BONE by (LA)HORDE is rather repetitive and proof that not every subculture should be turned into an art form.

Next comes Max Revell, winner of the BBC young dancer award with his piece Unstrung. With a painted white face and elastic binding his arms and feet this exploration of the pressure imposed on the body and mind is heart-warming and imaginative. The Irrepressible’s wailing tones underline it and pull the evening into its swing.

Shree Savani’s piece titled Devi is another proof of the calibre of the BBC’s young dancer competition. In traditional Bharatanatyam costume, Savani manifests comedy, tragedy and passion with her body and face. Although my Tamil is very rusty (non-existent actually) through Savani I understood the characters of the piece, focusing on the female goddesses and characters of hinduism. Her expressiveness and ancient movements allowing a visual story to be told across language, culture and time. Impressive much?

A group piece by Company Wayne McGregor brings a jarringly modern blast with an excerpt from their show Living Archive. After the traditional Bharatanatyam piece, this sudden race forward in time hammers home the wonder of this festival, its variety. With a piece created by a Google AI studying all of McGregor’s past work we have an experimental dance piece with lots of kicking legs and thrashing bodies. Although visually interesting and well danced the piece rather lacks a human touch (which is most probably the point).

Finishing off act one (and starting act 2) we have some good old fashion circus from Machine De Cirque. Firstly, a hilarious juggling piece with a live drummer, Olivier Forest who not only musically drives the action but juggles at the same time. This is pure and perfect entertainment and the fact that there were a few mistakes only builds the danger for the second part of the piece.

Leaving on a high the audience pours out into the large space only to be treated to Breakin Convention’s (another wonderful dance festival held in May at Sadler’s Wells) own Freestyle funk forum. A rap battle taking words from the audience and making a rhyme with it, Just phenomenal!

Back into the theatre and we are greeted by Machine De Cirque’s second piece. Bravely using the teeterboard (a very athletic and adult Seesaw) Forest again controls the piece now playing the banjo.  These men are skilled, handsome and cheeky and the whole act reverberates with the joy of performing.

Hooded figures appear from the darkness, bringing a terrifying and deeply personal group piece in the form of BLKDOG, by Botis Seva. With ominous lighting by Tom Visser, this complex mix of Hip hop And free form antics gives a troubling exploration of violence, pain and loneliness. The company Far From The Norm are brave and confident.

Again, in dramatic antithesis, we have Ezequiel Lopez and Camila Alegre in a tango piece so sensual, sexy and dripping with passion it almost feels wrong to be watching it. Alegre in a red sequinned dress is thrown about the stage by Lopez with the grace and coils of a serpent. The pair’s chemistry is astounding and blush-making in equal measure.

Finishing off the show we have the famous Geometrie Variable and a section of their piece Labora. Being a regular at Breakin Convention this hip-hop and locking group are a personal favourite. Their hypnotising and precise creation of inhuman shapes and their group work make them rightfully beloved.

0And that’s all folks! 2 hours of rap, popping, locking, ballet, contemporary, circus, tango, solo and Bharatanatyam, exhausted? I was! This festival is Sadler’s Wells reinventing the dance world, ever the renegade and the champion of the young, hopeful and gifted. Bringing together everyone with a love of dance and theatre and allowing for the bars of each discipline to be torn down and new avenues of movement to be created, the future is bright indeed as-long as Sampled survives!