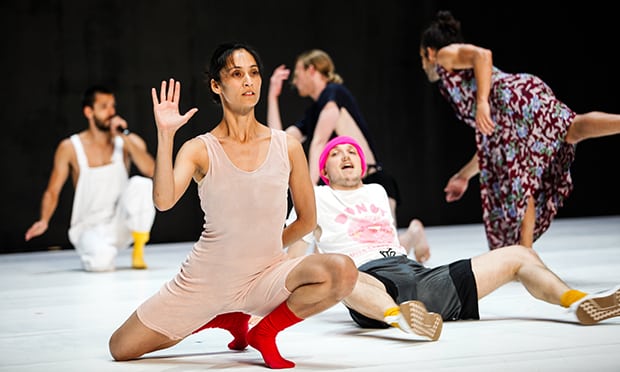 Now I know that contemporary and experimental dance has some folks tied in knots – stony-faced dancers solemnly thrashing around to the sound of heavy machinery in the background. The pretension I think is the main issue.

Thankfully, Gat’s style manages to explore, challenge and interpret the idea of dance without losing a sense of childlike charm and cheeky comedy.

Each section is moulded by a diverse range of scores from Strauss’s sweeping opera to Nina Simone’s bluesy soar, while Gats’ own more modern electric melodies also make an appearance.

This range of music feeds into the piece a wide range of emotional and symbolic imagery that shifts and changes as fast as the dancers’ bodies contort on stage.

Works, which started in 2017, has gone through various permutations and has now settled within Gat’s own company, and the cohesion and collaboration between the 10 dancers is satisfying to behold.

Choreography-wise, Gat is ahead of the game, focusing more on the role and scope of the individual dancers than narrative.

Yes, this approach may be a little hard for some to understand, but if you don’t want weird, Swan Lake will be dusting off its feathery wings very soon.

Works is a clever concept but visually not as bleak as modern pieces can sometimes be, and much less self-involved.

The dancers, dressed as if they went on a rampage in a vintage shop, ebb and flow like the growing layers of a snowflake.

A large white square takes up most of the Sadler’s Wells stage and in a mixture of party dresses, skimpy leotards and a kilt, the dancer’s bodies are visible, showcasing the amazing shapes possible within the human range.

Gat is as concerned with the visual exploration as he is with the physical, and along with taking the reins with the dance side he also curates the lights.

Sometimes though, Emanuel, we can take on too much, and although the lighting effect highlights some lovely moments, they are far too abrupt, coming across as jumpy rather than dramatic.

Deconstructing gender, not just with costume but with an equality of movement, is most refreshing, with the dancers bounding around with confidence and precision.

Their bodies weave a visual landscape so phantasmagorical and inhuman, yet rooted in something very personal.

With sections of audio talking about cereal and a morning routine, this show is very much about the individual, the corporeal and the real, avoiding the lofty pretensions of some experimental dance.

This piece is, from start to finish, amusing, arousing, sensual and innovative, and really, what more could you ask?