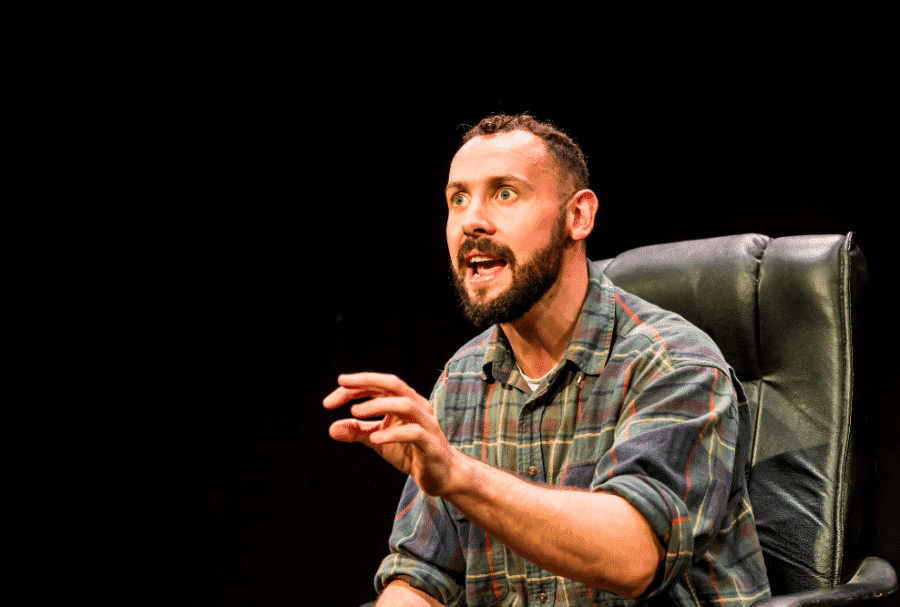 “…Like a big gay lion called Lesley”, this sentence from Bingo has stayed with me long after seeing the show, rattling around in my mind and causing me to giggle furtively to myself mid-morning. It both sums up and badly represents a show of scathing comedy and hidden depths. But the show isn’t all wordplay and gay mammals; Bingo packs a punch as a witty show focusing on one man’s struggle with death, family, sexuality, HIV (and others) and himself. He roars at the world in a story that is touching for anyone who has ever been alone in the city trying to find themselves.

As always, I will start with things that could be improved. With the subject matter centering around STIs/HIV and promiscuity within the LGBT community, the production feels at times like it lacks the impact that it would have had in say the 1990s/2000s. Not to say that it has no resonance at all, but this is a story we have seen before, and although it is well framed, I wouldn’t call it groundbreaking. Also, for a one-man show it is a tad long coming in at almost an hour, with that sort of length with only one performer and one chair you really need a varied pace and a cohesive story arch to keep the audience interested. Although the show has moments of real wonder it feels there is too much packed into it and that the pace gets repetitive as we get to understand the protagonist’s style of deflection with humour. Again, we have a case of a play attempting to hit a lot of very hard issues and maybe falling a tad short. This is by no means a half-hearted hop, but a full-bodied leap and although it doesn’t quite hit the mark, it does get pretty darn close.

Bingo overall is a triumph, fast-paced and sassy with a real power that is at times taken away from gay characters in the media and arts. Searing with a franticness and fire that scolds the audience with sarcasm, we are submerged into the life of the protagonist and fully believe everything we are shown, his self-hatred, his loneliness and his relationship with self-destructive behaviors. It is wonderfully written and performed by Alan Flanagan who so totally becomes the character that it’s hard to think of him as a separate human. Following in the great Irish tradition of writing pedigree, this is a very wordy show and is basically a well-written but rather long monologue. For those of you out there with short attention spans or enjoy a more active or varied show, this might unfortunately not be for you. But if like myself you value psychological truth, humour masking darkness and real vulnerability on stage, please see Bingo! The message of the show is incredibly important about life after diagnosis with HIV and the importance of living a full life despite past mistakes. It’s a story of healing, growth and human connection that makes your heart bleed and your eyes moisten. Please, please, please go see Bingo! After all, who doesn’t love a big gay lion called Lesley?

Bingo is playing at The Pleasance Theatre Trust