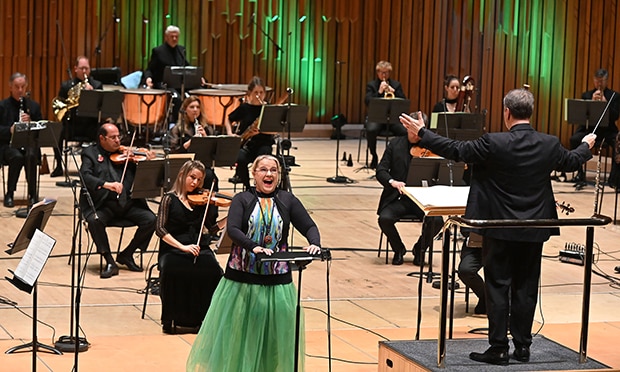 What follows is a stormy event of clashing composers, political opera and divine music.

Being the first completely live-streamed performance in the Live from the Barbican series, it’s wonderful that unlike many other events, this can go ahead with a digital audience. And with the BBC SO celebrating its 90th birthday last month, this was such a special time for both venue and performers.

After a short introduction by conductor Sakari Oramo, we cut to the cavernous Barbican, already populated with the musicians, all in black, looking serious.

Kicking things off with 15 strings, Anna Clyne’s mournful musical eulogy to her mother, Within her Arms.

The Grammy winner’s work tumbles through the concepts of loss and longing, the phonetic patterns of the different strings cascading like waterfalls only to erupt up again without warning.

The whole effect is rather aimless, but then so is grief, and the great swells that suddenly subside into light taps conjure up battling emotions admirably.

Following this, the whole orchestra pitches in for Joseph Haydn Symphony No 49, La Passione.

The “father of the symphony” doesn’t disappoint and the passion with which the BBC SO executes this challenging piece is astounding. The oboe and bassoon deepen this sombre and tragic sense, with vaults and rolls in the music that stir the soul.

Haydn’s playfulness within the music creates flashes of clear blue skies before plumbing down into cacophonous depths. Written during the Sturm und Drang (storm and stress) period, the swift changes in tone and precise sections of optimism colour the mind with thrashing waves and brooding clouds.

This delve into the minor key is rare for the composer and adds to the sense of building teenage angst that pervades the evening.

Oramo leads the orchestra like a captain steering a ship through a storm, directing its fury as the musicians’ combined talent heaves as one.

To finish the evening in a political tempest, we have the world premiere of the chamber version of Magnus Lindberg’s Accused.

Written in 2015 by the Finnish composer, it has been revisited and re-adapted especially with the soprano Anu Komsi and Oramo.

Lindberg’s modernist style is at its most experimental here as the texts are drawn from three historical trials.

Mme Théroigne de Méricourt, a French revolutionary singer, interrogated in Austria in 1791, starts the piece off in indigent but beautiful French.

Next, we are transported to the questioning of an unnamed citizen in East Germany in the 1960s, as the repetitive questions of the Stasi fill the halls.

Lastly, the US hacker Adrian Lamo is grilled about the Manning/Wikileaks scandal in English.

In a rather striking dress, matching the villainous green backlight, Komsi handles everything that is thrown at her, from the shifting languages and demanding melodies to the difficulty of embodying verbatim text. Her versatility, vocal strength and confidence are truly inspiring.

A tense atmosphere is felt throughout the evening and interestingly the music is neither relaxing nor peaceful (as some yearn for in classic music). This is a concert for the modern world and the explosion of paranoia in Accused finishes the evening with a decisive death blow.

The orchestra, Oramo and Komsi give everything they’ve got to transport us to these lonely and uncomfortable places.

Concluding with a rather crestfallen bow to an empty auditorium, if 2020 were a concert, it would be this.

Thank you to everyone involved for not just giving us mindless and insipid escapism but facing up to the sadness, injustice and problems of the world. The concert gave voice to our frustrations through music. It was brave and real.