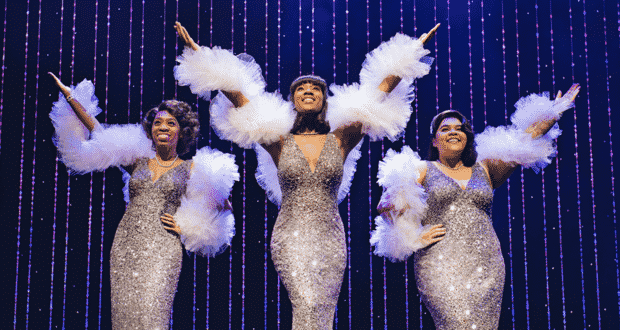 “3 nights only, 3 nights only, that’s all you have to spare” Like the famous song One Night Only reminds us, this fleeting opportunity to see the hit 80s musical Dreamgirls must be snatched, and snatched quickly!

Mirroring the rise of the record label Motown Tom Eyen’s snappy script/swinging hits, and Henry Krieger’s bombastic music stays relevant due to its themes; Cultural appropriation of black talent, exploitation of women, the struggle for fame and a better life. Are any of these ringing any bells?

We are thrown into the world of the Dreamettes (later Dreams); Outspoken Effie played by Nicole Raquel Dennis, beautiful Deena played by Natalie Kassanga, and comic relief Lorrell played by Paige Peddie. Like the real-life Supremes, their discovery at a talent competition propels the girls to stardom. Ambitious car salesmen turned manager Curtis (Dom Hartley-Harris) and subsequent tour as backup for star Jimmy Early (Brandon Lee Sears) shows that the journey is anything but smooth. Betrayal, infighting, and the price of fame are deepened by the searing atmosphere of the 1960s civil rights movement. The “crossing” over of black artists to the white pop charts and their struggle against the parasitic white music establishment and one another.

Eyen and Krieger’s partnerships won them 6 tony awards in 1982 and for good reason. The songs are hits in their own right both catchy and vocally demanding. The accumulation of what can only be described as black excellence cast wise is a…..dream (sorry terrible pun but it had to happen). Raquel Dennis particularly as Effie is tasked with a massive range and needed umph to knock down a brick wall. Thankfully she delivers. Lee Sears as the established star Jimmy Early channels all the wild vocal gymnastics of Little Richard and the sleaze of the music industry. Kassanga as Deena follows in the footsteps of the film’s Beyonce confidently, and her change from shy backing singer to solo performer is a well-crafted arch. Another equally well-built bit of character architecture is Hartley-Harris as their manager, showing the temptations of gold and ambition. It helps that he has a smooth velvety voice and tight dance moves, the whole package indeed making a very stylish baddie.

Raquel Dennis’s celestial singing voice does make up for her at times faltering accent work. Shem Omari James as C.C the dream’s writer (and Effie’s cousin) is not the strongest singer but embodies the character well. Apart from that the cast belts, and boldly bounces around the stage, never allowing us a second to catch our breath.

Tim Hatley understands the need for movement in the set and costumes. Towers of grates adorned with large glowing fresnel glide too and frow, helpfully switching to show us onstage and backstage. Silvery curtains descend for quick scene changes and keep everything fresh. Lightning-fast costume changes capture the frantic pace of show business. Everything is glitter, fringe and tassel, sharp suits, and the hugging feminity of the 60s/70s. A slicker touring production would be hard to imagine.

Casey Nicholaw directing and choreography craft a distinct version of this classic musical. Setting aside the Hollywood incarnation for a truly spectacular event. The focus more on Lorrell and Jimmy’s relationship provides more laughs, and the overall pace means the evening is over far faster than you would like.

Dreamgirls fictionizes the story of the rise of Motown and specifically the brilliant women that crafted that movement (Diana Ross, Mary Wells, Mable John). Yet it also highlights the very human dream of making life better for oneself against all the odds. As this tour tornadoes around the country make every effort possible to catch them! After all an evening of sequins, stupefying vocals, and civil rights? What more could anyone want? Follow that dream!

Don’t miss out on the next touring phenomenon, Click here!