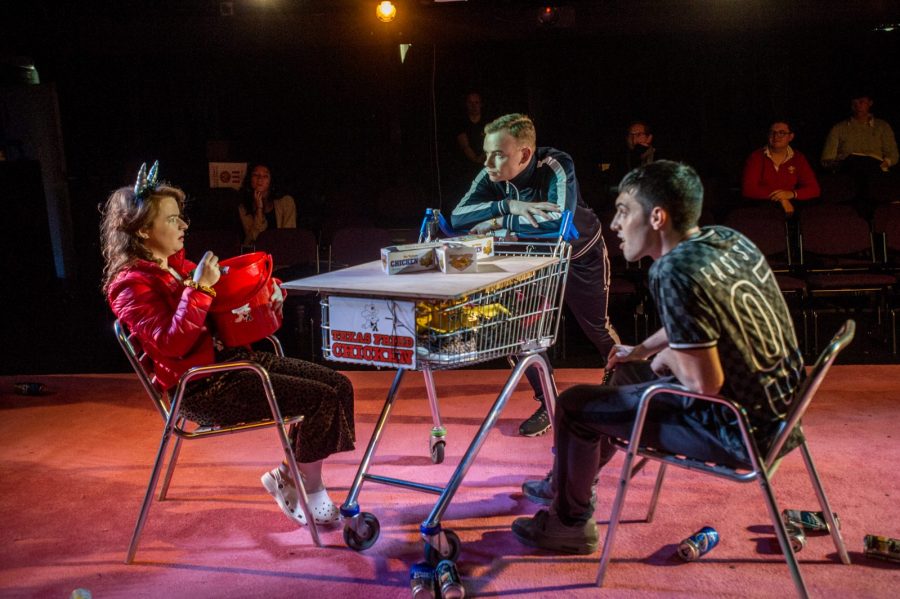 Ambitious, infectious, yet seemingly never-ending, Cuckoo is a boiling pot of talent and potential that would have to be subject to a considerable sizing-down before becoming a hit show. Touching on issues such as leaving home, teenage bullying, gender dysphoria, identity, and the rise of social media, there is a lot of wonderful subject matter in the piece, it’s just finding it that is the issue.

Set in Ireland, the plot is gripping in places, following two misfits as they try to escape to London away from Crumlin’s cruel small-town heroes. My only criticism would be that this play’s running time needs to be (at the very least) halved before it’s engaging ideas are brought further into the open.

Put simply, it’s about double the length it should be, coming in at almost 2 hours with no interval. Now, I think that’s too long for any piece without a break for an audience. But with 5 actors, no set and a small space, such a long-running time becomes even more detrimental to the piece. There are scenes that could easily be cut out, and Cuckoo needs a pretty big chop before it is cohesive and effective. The repetitive style of writing means you begin to lose interest, or start getting frustrated. That is not to say that Lisa Carroll‘s writing . She neatly captures small-town mentality and using the wonderfully lyrical Dublin slang to her advantage, but there is no editing, and beautiful moments are lost in the ever-expansive sea of dialogue.

Aside from the length, there is a lot of greatness packed into this piece. The energy of all the actors drives the movement of the show with flair and teenage ferocity. The storyline following Pingu, the silent gender-neutral lead, is fascinating. Elise Heaven’s performance stands out also, contrasting the loud and constantly talking cast with its depth and quietness. Caitriona Ennis playing Iona, Pingu’s best-friend, holds the show together with her kooky and hopeless attempts to both escape and fit into the small-town life that has tormented her and Pingu. The cast brings excitement and franticness to the show, exploding on stage in a particularly brilliant party scene. Cuckoo wallows in the cruelty of the city, creating almost caricatures of the deprived suburb of Dublin. The symbolic yet deliciously crass use of language plays to all the actor’s strengths.

The lighting by Jessica Hung Han Yun does come to the rescue of the narrative and stops it from grinding to a halt, but there’s only so much you can do at The Soho Theatre. There are beautiful moments of heartbreak, and overall it’s a very funny piece shedding light on topical issues, important to a modern audience. The way bullying has evolved with technology, the sometimes hopelessness of trying to escape one’s upbringing, and the dark irony of life, are all explored within this rather confusing bundle of a play.

Would I recommend it Cuckoo? To a degree, yes. It’s wonderfully written, well-acted and poignant. As well as funny, the classic Irish flair for language and storytelling is well exhibited in Cuckoo. But sadly, all these good things are somewhat lost within the lack of brevity and focus which the show trips upon. I am excited to see what Lisa Carroll produces next, but will be keeping an eye on the running time.

Cuckoo is playing at The Soho Theatre until December 8.