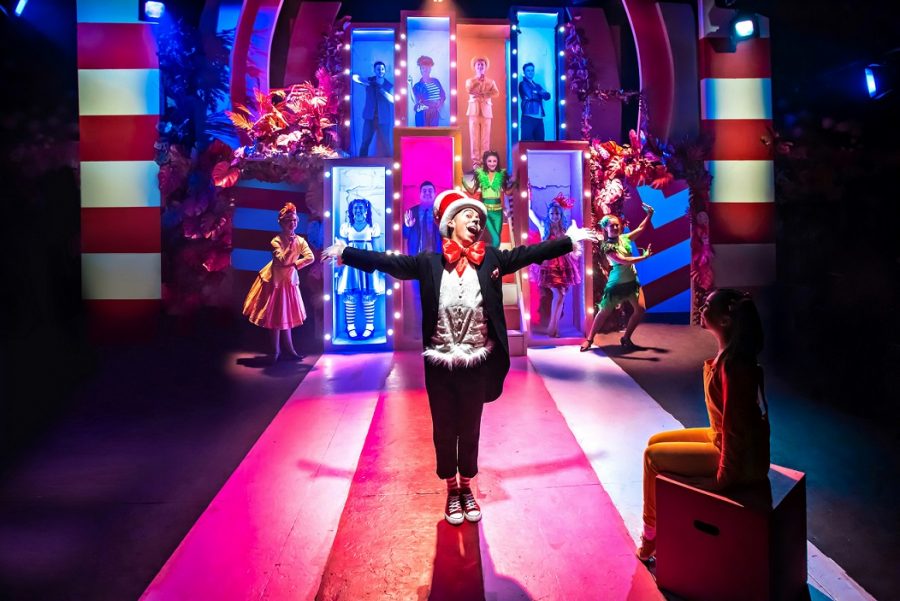 Whimsical, nonsensical, and sadly lacking heart, Seussical the Musical aims to blend many of Dr. Seuss’s characters into one flashy surreal tale filled with rhyming, joy and well…more rhyming? Unfortunately what transpires on stage is a messy and rather disappointing production.

But where, oh where to start? Maybe where the play and I creatively depart? (#sorrynotsorry). This is obviously billed as a children’s production that speaks to all ages and groups (apparently) and like the books, I expect the classic strange world with linguistic vigour and outlandish characters, only this time with added music (enter jazz hands). What we get is a slightly cheap, lacklustre musical with 3 good songs repeated over and over again. Not only is a lot of the vocal work sloppy, but the immersive concept boils down to the actors shouting at the audience members until some rather awkward audience participation is produced. Along with the fact that it doesn’t have an interval (75 minutes, with a 5 years old and no clear exit, help?), the costume is unimaginative and it’s hard to work out what people are saying/singing. This production feels cramped on the stage at the Southwark Playhouse, and is maybe a tad overambitious for the space. By liquidating The Cat in The Hat, Horton Hears a Who! and Gertrude McFuzz together, we only succeed in losing the charm and message of each one and landing in a glittery and confused heap on the floor.

There are some saving graces, as the production is not without charm or enjoyment; Marc Pickering playing the hatted cat has a comic genius to rival Mike Myers of the original film; hilarious, engaging and a lifeline for a production very much needing it. In addition, Scott Paige’s (playing Horton) voice is superb, giving much need vocal oomph, he plays an elephant as well as he can (considering the very little help he is given from his costume or set). The show is all American teeth and sparkle and, for some, that is all that’s required of a musical, but I need more, and considering Dr. Seuss’s seething comments on environmental destruction (The Lorax) or happiness (The Grinch) I think his works deserve more too! The production is pushing in every direction against the constraints put upon it, and this is very evident to the mainly adult audience.

I have been a lover of Dr. Seuss’s books since I was a child and this show is funny in parts and maybe would amuse a very young human, but comparing it to the various effective films and the books themselves, you just ask yourself why this current incarnation has been created. The constant march to create musical after musical feels rushed and unnecessary in this case. This careless production loses the very edge, darkness and meaning that made the American writers work so special. With constant hammering, the story is Frankenstein’ed into existence in a desperate attempt to appeal to the theatre-going public’s childhood nostalgia, and no amount of “green eggs and ham” will save it.