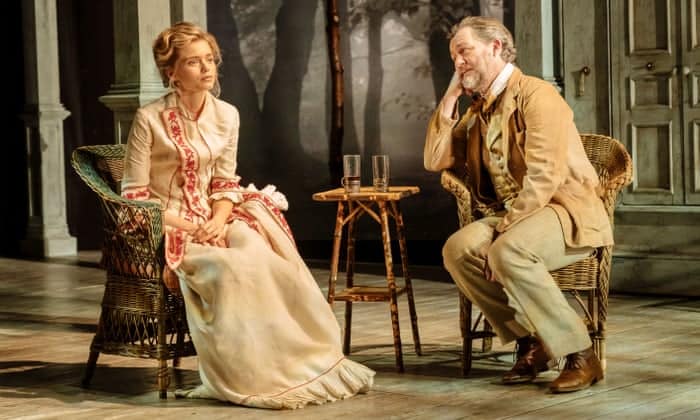 Why do we watch the same plays over and over again? Is it a testament to the innate genius of the writers? Because they cover issues constantly facing humanity? Is it a lack of imagination, perhaps? When seeing Uncle Vanya restaged at the Hampstead Theatre last night, I asked myself these questions, unfortunately, the answers aren’t very forthcoming.

This piece is just lacking a certain flavour, like an unimpressive potato soup – it’s not unpleasant, just unremarkable. Tim Shorthall’s set is pretty. Most of the acting is reasonably good. The focus on humour is enjoyable, but the lack of clear direction in the piece seems to miss many opportunities to make a pressing point. It could be called a tad intellectually lazy, and rather bland. It’s the way that this production trips upon. It, by no means, ought to be relocated to outer space, or have every character dressed up as a Pokémon, but surely we can find a new perspective from which to view a story set deep in the later part of the Russian imperial empire? Even if the aim is to create a classic production – the acting, pace, and rhythm of the show must be the crowning glory, and it sadly isn’t in Terry Johnson’s production.

Certain performances that are pivotal to the plot let a lot of the pace out of the show, such as Yeliena (Abby Lee). Then, whatever connection that is forged with the audience, is completely drained by uneasily long set changes behind a badly printed curtain. The crisis scene comes off as vaguely farcical, and the end scene grinds to a painful halt as we dawdle to the culmination of the play with a rather frumpy sigh.

Having said that, the play is not without its enjoyable moments. Alan Cox as Vanya and Alice Bailey Johnson as Sonia provide strong, if not necessarily ground-breaking, performances. The representation of the idle Russian upper class is wonderfully languid and historically interesting. It is well written and funny (it is Chekov, after all), and the comedy that is capitalised on is the saving grace of the production. The skeletal remains of the house are pleasing to the eye and the misery is gorgeously phrased. The themes are undeniably interesting, and the thwarted lives and boredom of these characters, “this leisure will be the death of me”, is something we have all felt.

What we haven’t felt (well, maybe only I haven’t) is the “miserable” life of the nineteenth-century Russian aristocrat, and this production makes no attempt to speak about anything else. It causes no ripples and makes a very little claim on the audience’s heart or mind. It is another rather unimaginative staging of an interesting play, and layers nothing new on top of the play’s historical context. Ironically, the theme of Uncle Vanya is the stagnation within the upper classes, and unfortunately, this play is an example of life imitating art.

Uncle Vanya is playing at The Hampstead Theatre until January 12