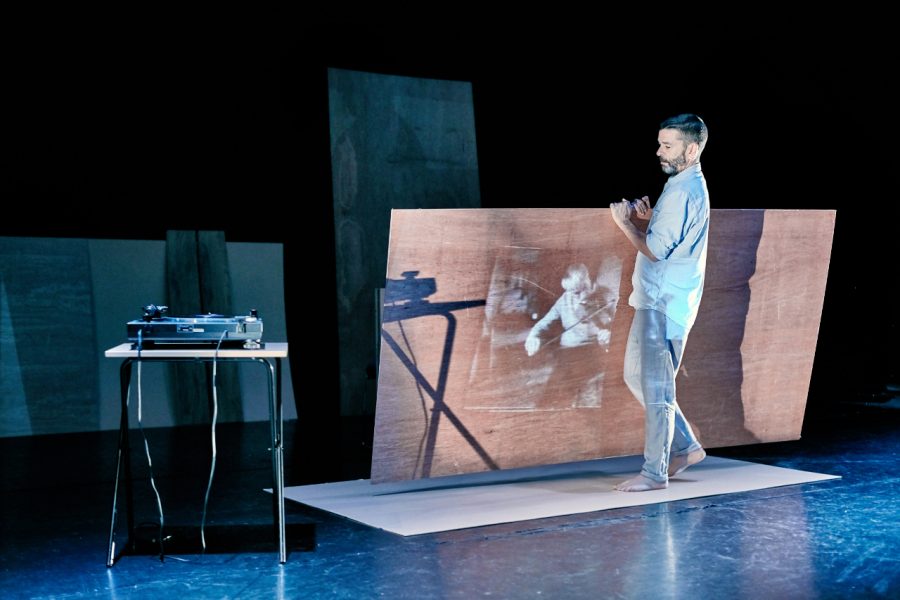 Traditional Irish dancing; the springing, the fiddling, the stiff upper bodies, and stony faces. As someone who knows very little about this cultural phenomenon, I jumped at the chance to watch Colin Dunne exploring Tommy Potts’s (one of Ireland’s cult fiddle players and composers) music. What I hoped for was a show that explained both his history and the roots and pull of the dance itself, but what I got was something quite different.

The show is unfortunately very self-involved, and almost completely inward-looking. Apart from some explanation of the basics of Irish dance, and a short chat about the complexity of Potts’s music, the rest of the show is mostly Dunne gazing off into space as he cavorts around the stage, very much alone. Potts was a firefighter who lived in Dublin through the 20th century and considered an important player in the evolution of Irish folk music because of his excellent musicianship.

None of this information is given in the show, however. Surely his life must have been interesting enough to warrant some personal details? You get no background on his music or any context to help understand his genius. For die-hard Potts fans this might be a wonderful show, but for us less in tune with the Irish dancing scene’s elite, this show baffles and confuses. I think a good show explains itself, forcing you to understand and enjoy it, or else the transformative, mind-opening power of theatre is lost, and we are in the realms of opera (a controversial statement, I know). This show is less a dip-your-toes into the beautiful ocean that is Irish dance, and more a headlong dive into depths unknown, oh – and you can’t swim.

The show features some clever twists and turns, projections and recordings of Potts, a conversation with his disembodied voice which is rather amusing and some nice aesthetics. Regretfully, all of this doesn’t distract from the fact that you are watching one man jump around the stage to (admittedly wonderful) music. Another problem is the lack of live music; apart from small sections on the piano and fiddle, most of it is recorded, which lacks the magic of the real thing and is lazy, considering this show is in the Barbican. All the intelligent lighting in the world can’t detract from the fact that Irish dancing (in theatre) is normally done in large numbers, with massive sets, costumes, and live music (see Riverdance). Unfortunately, solo Irish dancing without much explanation or surrounding details is rather monotonous to watch, no matter how skilled it is.

Because I’m not saying the skill isn’t there, as the movements of Dunne’s feet defy gravity and logic and Potts’s music swells more like a Debussy score than the classic fiddle jig you might think of. I was drawn in by the clever interaction with the music and enjoyed the brief sections of fiddle playing and piano. Furthermore, I highly commended the attempt by Dunne, for Potts’s music is considered un-danceable to, and Dunne proves that partly wrong. Whether it is enjoyable to dance to and creates an effective show remains to be seen, however. There just isn’t enough here to accommodate the interest of the audience for almost an hour, and without any historical context, we are left wondering if Dunne has forgotten about us as he gets lost in the music. I entered the theatre an Irish dance skeptic, and although Potts is now downloaded on my phone, I don’t know whether I agree that it is truly lord of the dance(s).