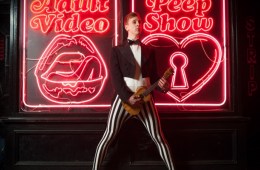 A romp through the Regency and a tryst with the Tudors; reveling in the salacious, unseen and tumultuous lives of the queer folk of the past and present has never been so much fun. “Lord” George Hicks and Josh Cockcroft’s innovative, highly amusing and utterly arch tale of gay history has an understandably esoteric audience spellbound. But never fear, those who aren’t a friend of Dorothy can also enjoy this whirlwind of a show. If you like history, irony, comedy or very tight tights, this show is the steaming cup of tea for you.

But is all that glitters really gold? Almost, in this sparkling case. The story is a little Eurocentric (but a universal history of homosexuality might take longer than 55 mins) and slightly focused on the gay male experience (but then at least in Britain so was the law for a large period of time). Understandably in a short piece that must also retain humour, everything cannot be covered. Another small issue is the use of a rather basic PowerPoint-like set-up with a screen and a projector. Not only doesn’t it fit in with the cabaret theme, but also it’s a little plebeian for the shows artistically decadent feel. But again, this is a practical issue, and although the images add reality to the stories, the descriptive monologues and wonderfully image-filled songs cover that admirably. With a mix of original songs and classic covers, the screen is unnecessary. It should be more Weimar Republic dive bar, than the end of year presentation from Karen from finance, but again, small peanuts.  Apart from that the show frolics between side-splitting sass, and poignant moments with grace, flair, and artistry, and enough eyebrow lifts to seriously burn some calories.

But what makes this use of cabaret to tell a historic tale so effective?  Well first add a talented performer, capable of crafting a persona resembling an aristocratic Beetlejuice, who sings, plays various instruments and interacts with the audience with panache. A cross between Flanders and Swann if one of them died and a singing Oscar Wilde, Lord Hicks has a truly beautiful singing voice. His accent is so shockingly posh; it’s like being serenaded by male Keira Knightley (who could say no?). Secondly, this power couple Hicks and Cockcroft collectively have an ability to craft humour around serious issues. Touching on the AIDS crisis, section 28 and 300 years of fierce burning hatred in a flippant manner without seeming tasteless is a very hard task to achieve. Just gauging the audience’s reception, (many of whom will have lived through both terribly dark years of LGBTQ+ history) the murmurs, laughter, and emotion hanging in the air is palatable. Lastly, you must have an ability to change pace, and with very simple props and lighting create a world so far from our own, and people so distant with only the gentlest strums of a ukulele. Bring all these elements together and you have a hit Edinburgh fringe show, a YouTube video (google the Grindr song and you won’t be disappointed) with 3000+ views, and a smashing success on your hands, so what are you waiting for? Off you pop? Get creating!

But watching Sod’s Law entertain and enlighten it does seem so easy, flowing, and natural. The “fables of fagatory”, expertly told by Lord Hicks as he dazzles us with vocal skill and sarcastic acrobatics, hides the message beneath the shade and camp. Slipped under the tailcoat, and just above the heel is the heart of the show, pure and bright. A message of acceptance, far more complex than our current in vogue branch, an acceptance based on the struggles of the brave queers of yesteryear, a battle hard-fought and not completely won, with a quip and a laugh Hicks brought a tear to the eye, and that is magical.

Sod’s Law Has finished its run at the Pleasance Theatre Trust.