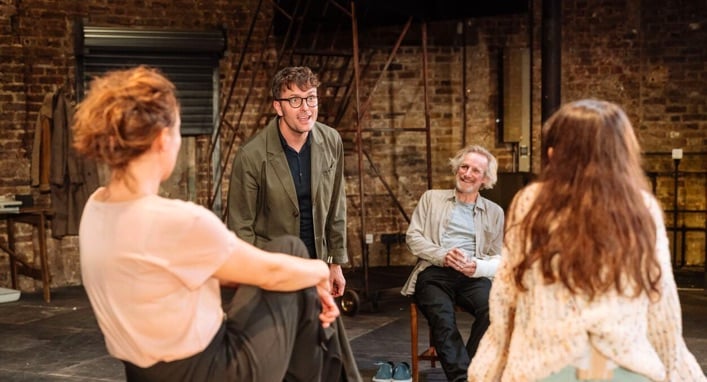 Henrik Ibsen‘s classic play The Wild Duck is reinvented for a modern time, and with a modern style. The evergreen issues that underline the story stand out even more because of the new face it presents. This production oozes with intelligence, beauty and guts – a slow burner, but a show bobbing on a sea of its own questions. It is baffling at every turn, although anyone who’s a massive fan of ducks might want to give it a miss!

It takes a little time for the genius to click, like trying to understand the point of a James Joyce novel or an Arthouse film. This post-modern reworking will have Ibsen purists running for the hills. Complete with fourth wall destruction, the breaking of character (very Brechtian) and use of microphones that would put The Wooster Group to shame, Robert Icke deconstructs the play we know and love. He pulverises it so it is barely recognisable but somehow manages to reveal depths that have been hidden within its cultural and historical context. Then again, it’s only really in the second act where this retelling latches onto your mind with its tender-hooks. The first act is a bit heavy going, and although startlingly episodic it only makes sense when appreciated within the glow of the second act (and when looking back at the piece overall).

Undeniably, it is a masterpiece. Gone are the comforting 19th-century set and costumes, gone are the naturalistic movements and speech, but in their absence, the meat of the play is exposed fantastically. Ibsen’s symbolism, character arcs and sense of moral turmoil is not only highlighted by this production but spun on its head. With background information fed through microphones by the actors as themselves, we view the personal history of The Wild Duck in a new and heartbreaking light. We see the battle that rages throughout the play to seem truthful, and ironically, our reliance on lies to survive. This, told within a play, is a clever touch in a field of impeccable dramatic choices.

Twinning a bright idea with talented actors is surely a way to ensure a wonderful production, and The Wild Duck leaves no pool unexplored. Everyone – without exception – acts beautifully, but those who stand out are Clara Read  (playing Hedwig Ekdal) and Edward Hogg (playing her father, James Ekdal). Read copes with a challenging role with ease and effortless ability. Hogg’s Edgar is neurotic and sweet, overinflated and naive, natural and surreal, and captures a human crossroads of ideas and class splendidly. The rest of the cast demonstrates such a high level of skill that it is difficult not to mention everyone. This production’s complex and multifaceted themes are explained by a strong foundation of knock-out performances.

The attention to detail and use of a bare setting that builds up to elaborate scenery follows the thematic battle that the actors have with human emotion. This chaotic struggle between real and make-believe forms the prefect tension within the production. As the lies progress, all involved are lost further. So many issues are touched on, with the fight between idealists and realists, fact and fiction, class and morality and many more. The play questions so much of what it means to be human, what is it to believe in anything, how life can be lived in a myriad of different ways, and how pain can present itself in a million different shades. It asks you about the lies you tell yourself and others, and ultimately begs the question: “Who needs the truth?”