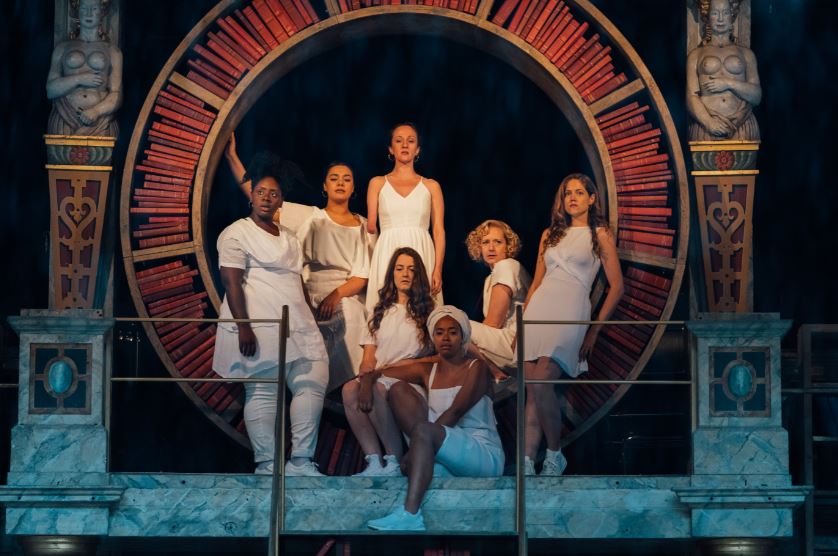 “Do not take my anger away from me!” screams Emilia Bassano Lanier as she accuses the audience and the world of stripping her of her voice. The eponymously named Emilia at The Globe burns with justified anger, wit, and a tongue dipped in venom. We are introduced to the overlooked, undervalued Emilia Bassano Lanier, feminist, poet, lover, and mother. We are caught up in the fury of her time, and the ground-breaking events of her life. Never has a show felt more fitting to the current climate, and never have we felt more empowered and incensed to change. This is a political rally of a play, so leave your privilege at the door; although enjoyable, you must be ready for a fight!

It is a long fight though. A very long fight, coming in at almost 3 hours (including interval). This is a hard-hitting, clever show, but it also drags a little at points and could be slimmed down to deliverer a more direct punch. There are some moments (not many) where the play tries a little too much and gets messy. Brevity would help keep our attention focused and cut the clumsy sections down to get a more streamlined show. The orchestra, although wonderfully Tudor, are clustered around a table in the gallery with a small reading light. They look forgotten and were clearly meant to be politely ignored, which is strange for a show in The Globe. Overall the show is a triumph, but it could be a slightly shorter, slightly cleaner, slightly more effective triumph. Only slightly.

But done am I with my whining! This show is timed to the nanosecond when it comes to political/social commentary. With the unashamedly feminist subject matter, the all-female cast and the fire of Emilia’s own poetry it is spot on. This show is Hamilton(without the singing) in the fact that it uses a modern and inclusive lens to focus/rework history, changing it from a stuffy white men’s game to an encompassing story of humanity at its best and worse.

This is so important, a delight and an explosion of fresh air! Emilia achieves this through a wonderfully funny and heart-breaking script, a majestic cast, a beautiful set and a risk taken by The Globe itself. For a theatre created under the centuries’ long shadow of Mr. Shakespeare, producing a play that questions his genius and openly brings to light his darker side is very brave and I thank them for it. So what if this play takes (quite a lot) of creative license? it is more than just a historical biopic. Emilia starts a flurry within anyone who’s ever been ignored or discriminated against and this builds into an avalanche. We follow this bright, passionate women through a life made unnecessarily hard by a time that is so unlike our own, but scarily familiar.

The intertwining of humour and poignant moments is supremely skilled and a testament to Morgan Lloyd Malcolm as a playwright. There are too many clever sections of this play to touch on individually. But for a play chockfull of “clever women” (as Emilia is called by her useless husband), it shines brightly as a beacon to the women of the past and future, as a call to arms and a bloody good show! Having three actors plays Emilia is a wonderful touch and I must say that Leah Harvey, Clare Perkins, and Vinette Robinson all brought a different feel to the different stages of Emilia’s life. This was done with such raw and magical talent that you are left speechless.

This show is a whirling dervish of topical comment and dry wit, touching on race, sexuality, feminism, Brexit, and immigration along with all the elements present in a 17th-century setting; rape, witchcraft, plagiarism and the role of women in society. This is the start of new and bright time within theatre and plays like these keep it going. Emilia comes out punching and doesn’t stop, swinging wild blows upon the rules we have created and landing every single one. Emilia Bassano Lanier in her life was downtrodden by a world unready for her fire, but Lloyd Malcolm, The Globe and the cast of Emilia have given her a rightful place in history that she always deserved. This is a pure and simple wake-up call for all the pushed-down and silenced. With skill, passion, and most importantly anger, we are awoken by Emilia, and it’s impossible to return to a slumber!

Emilia is playing at The Globe