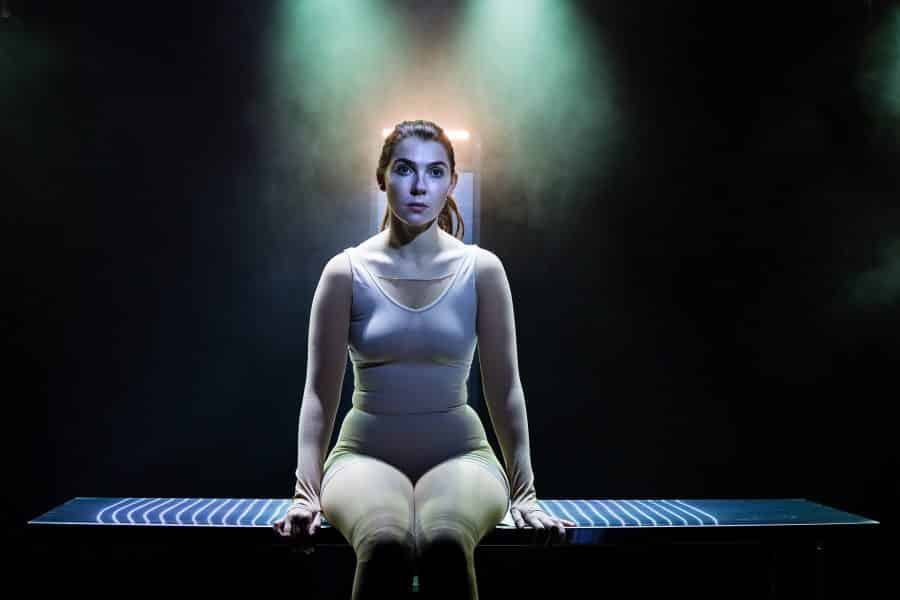 All singing (except without the singing), all-dancing (except without the dancing), Dust is a show that has its hands tightly around your heart and won’t let go. Depending on your emotional stability, that’s a good thing. Never have I seen a more effective, irreverent and igniting one-woman show, never have I seen a show speak about mental health with more intelligence, bravery, and humour. High praise? Well, Dust deserves it.

And here’s why. We are introduced to Alice (played by Milly Thomas, writer, and actor extraordinaire) just after her death, as this modern ghost story discusses her suicide and the effect it has on her friends and family. This show, as you might have guessed, is not a happy-clappy musical, and like an adult version of the children’s book A Series of Unfortunate Events, if you want a happy tale, pick another show. The writing, lighting and acting mercilessly harpoon you from within. If you are offended by any of the following – death, depression, suicide, sex, masturbation, planned infanticide, examining of a dead body, self-harm, drugs – then this is probably not your cup of tea.

Although the show to some might seem ghoulish and over the top, the bravery to write with such candor is astounding. Dust cuts no corners and shies away from no difficult issues and that is applaudable. Although it is not necessarily an enjoyable show, it is engaging to the extreme, and darkly funny.

The direction from Sara Joyce is clever and punchy, and the set (like a futurist dentist’s studio) and wonderfully brutal lighting (Anna Reid and Jack Weir) work wonderfully to create a one-woman show like no other. It feels expensive, and slick, and avoids all the cliches of a solo show. This is a far cry from sitting in a boiling hot room above a pub watching a guy on a stool discuss his sex life without lights or music and only a banana as a prop. No! This is a fully-fledged play, that happens to have only one person in it. Having more actors on stage would not fit this ghost story for the digital age, and Alice’s growing loneliness and regret are actualised perfectly by her solitude.

Milly Thomas is a true star on the rise. Often, having a writer who also directs or acts, or – god forbid – both, is a huge pitfall. But Thomas is a glowing exception to this rule. Not only is this an outstanding piece of writing, filled with wit, humour and heartbreak, but she is also a world-class actor, producing real tears, changing physicality with the ability of a chameleon and embodying the space with ease and confidence. All hail queen Thomas as it is she, with the help of a wonderful team, who manages to pull off this difficult play.

Dust discusses an issue that is literally killing our young people, and linking the production with the charity the Samaritans is a wonderful way in which theatre can be a voice for change and good, not in a wishy-washy way, but in a real and active sense. This show’s pace, subject matter and delivery are unforgiving, but vital and glorious, and watching pieces like these, you are reminded of the hope that’s left at the bottom of pandora’s box. A hope for change, a hope for truth and open discussion and a hope for life. Thank you Dust for giving us hope.

Dust is running at The Trafalgar Studios