The Picture of Dorian Grey 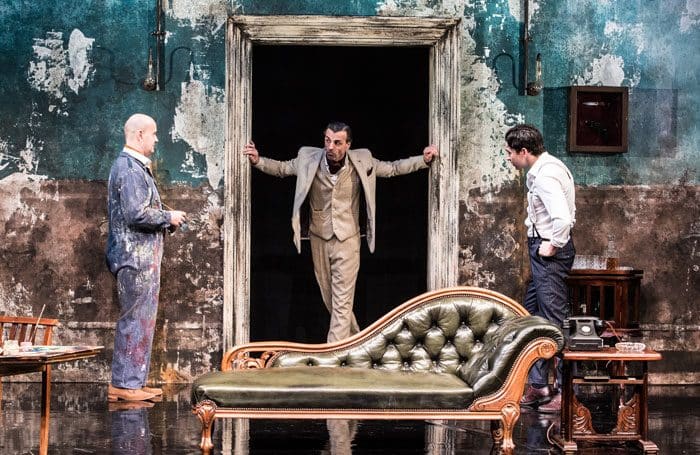 Sex, murder hedonism, and art. What more could anyone want from a tale? The Picture of Dorian Grey as a fallen hero shines with Oscar Wilde’s caustic wit and has earned its place within the classical canon. Having far-reaching consequences for both its author and his audience, it’s a mouthful of a piece. One that, unfortunately, this production at The Richmond Theatre has trouble swallowing.

Set in one of famous theatre architect Frank Matcham’s stunning edifices, the setting couldn’t be more perfect, the theatre having been erected around the same period as the novel is set. The perfection doesn’t last long though. Following the beautiful youth as he binds his soul to a painting for everlasting good looks, the production is confusingly recontextualised to what we assume is the 1930/40’s. It is a messy affair and seems to have no real purpose. The decadence of the 1890’s (when the novel is set) contrasts heavily with the war-obsessed 30/40’s, and the homoeroticism and effeminate nature of the male characters is completely at odds with the period it is moved to. This is not the first example of incidental muddying of the novels waters.

This production just rings off, being a rather prudish view of one of the most shocking and scandalous books of its time. To not delve into the very heart of “new hedonism” and the cruelty that it is so often accompanied by is to do the novel and its writer a disservice. I mean, this book is apparently “calculated to subvert morality and to encourage unnatural vice” the very criticism used in Oscar Wilde’s trial to convict him of homosexuality. This production sanitises and dilutes it so much so that none of the sex appeal is left. This is a opulent, distressing novel filled with blood, hatred and philosophy. Oscar Wilde was one of the most high profile homosexuals to be convicted openly in British law. Therefore the three main male characters’ love triangle wasn’t viewed by the Victorian public as purely platonic, so why would a modern writer bleach this most important piece of gay culture? One fully dressed orgy (which is basically a flash mob) and a vague hint at a homosexual tryst does not a Picture of Dorian Grey make!

The only saving grace is a truly beautiful set by Sarah Beaton, although her stylistic choice of using a frame covered in plastic for the portrait is just anticlimactic. Nevertheless, a cracked 19th century drawing room plays host to some glorious lighting effects by Matt Haskins. The peeling paint and minimal furniture cast some impressively ominous shadows. Also, Jonathan Wrather (Emmerdale and Coronation Street, spoilt!) playing Henry provides a strong backbone for the production, standing the comparison to Colin Firth in the 2009 film pretty well. Additionally, Daniel Goode as the painter Basil offers some strong acting amidst the theatrical clutter. Gavin Fowler playing Dorian falls quickly into melodrama when later on in the play our leads succumbs to vice. The rest of the cast, although playing the parts reasonably effectively, don’t really stand out.

This is my favourite book, and Oscar Wilde’s only full novel. It lives on within not only LGBTQ+ culture, but culture in general as a deconstruction of vanity and morality. It is complex, contradictory and monstrous, and a very difficult feat to pull off. This is an attempt to stage the story but without any real understanding of the unpalatable nature therein. Unfortunately, Dorian’s statement “I love acting. It is so much more real than life” falls on deaf ears as the house lights of The Richmond Theatre begin to rise.

The Picture of Dorian Grey is playing until 27 April.