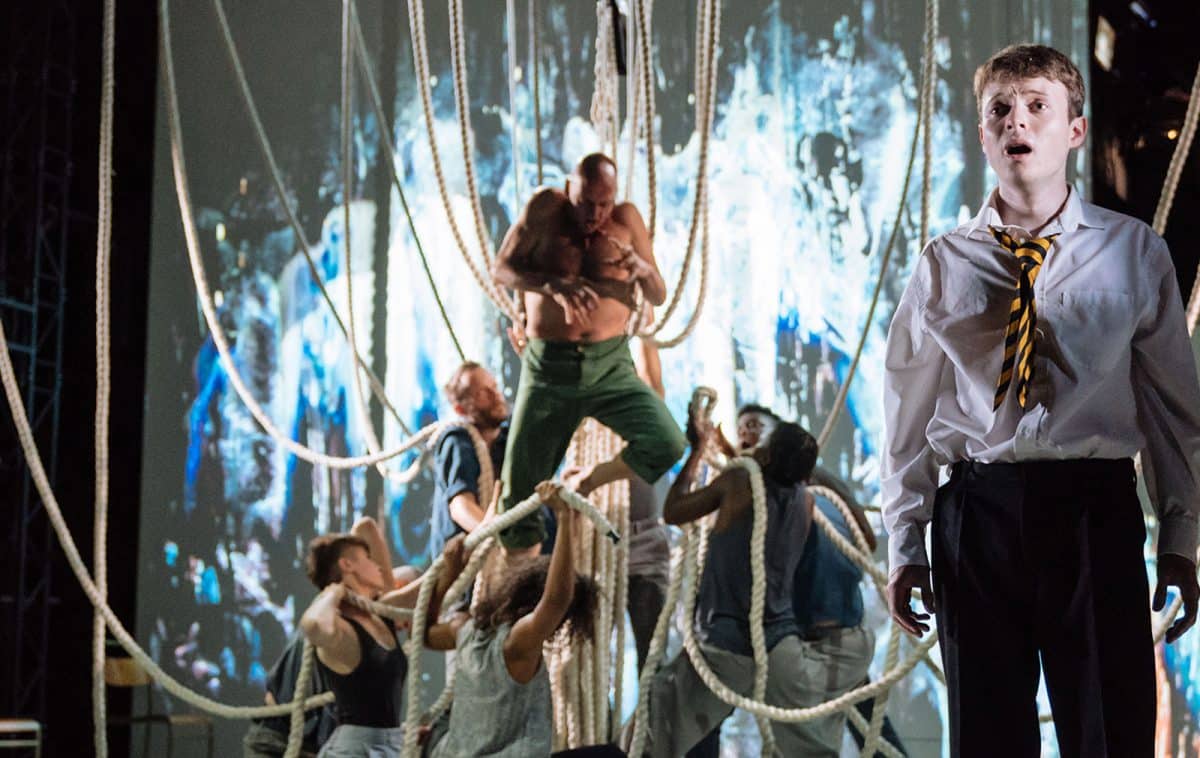 A story of complex morality and the battle within us all to find the strength to carry on in the face of life’s cruelty, A Monster Calls should be a heartfelt sucker-punch of a show. Unfortunately, although the show is of a high quality, it is let down by a couple of major problems, reducing this ground-breaking story to merely an acceptable show.

We are introduced to Conor, who at the tender age of 13 is thrown into a situation no child should ever have to deal with, but many do. His mother has cancer, and this painful truth is twisting the young boy inside out. Bullied and alone he needs a friend, someone to ease is suffering. This is when the title kicks in – the monster that calls – and also when the problems start to stack up (theatrically speaking). Being eponymously named, the magical Yew tree at the end of the garden comes walking and recounts fairy tales to show Conor another perspective of his world. After watching the film and then hearing about the stage show, I envisaged some clever use of light or a warhorse like a puppet. What happens on stage is a tree made out of rope and a bald man, topless with beads around his neck. This is a lazy and at times ludicrous attempt at a monster and no matter how much they put him in a harness or cleverly try and use the rope to increase his size; it’s just not monstrous enough! One topless man with a distorted voice doesn’t not a monster make. I understand the production doesn’t want to simply follow the film, but this is unimaginative and distracting from the fairy tale theme of the show. Stuart Goodwin (the monster in question) acts wonderfully and does his best, but too much is being of him and he is left unsupported by the choices of the production.

Laziness seems to be common failing for this show as although it is beautiful and effective in many ways, it is also lacking in originality. The main pull of the piece is the clean space, use of lights/projection and the chorus-like use of people instead of traditional set elements. All wonderful, modern and exciting but the choices of the creative team made the show almost indistinguishable from The Curious Incident of the Dog in the Night-time, which was such a revolutionary smash hit on the West End. This is disappointing as of course, the interplay of ideas within theatreland is wonderful, but you must bring something new, twist the style to the story, and not piggyback on the success of another show. Although the show has wonderful moments, it lacks a real spark of creative individuality and therefore falls un-inspiringly short of its film and novel siblings.

Although lacking in an overarching sense of originality, that doesn’t mean there aren’t really beautiful moments, and I don’t want to be unnecessarily unfair. The show’s subject matter is very moving and manages to create a positive impression even in the face of such negative problems. The emphasis on truth and the inherent contradictions of the human mind and heart is really magical. Coupled with a music score that sounds like it was plucked out of a Bon Iver album and a cool use of light and projection, the show is very sleek and stylised. The use of singing, although only used once, is glorious but short-lived. What saves the show is the high level of acting from all of the actors, especially Goodwin and Matthew Tennyson who plays Conor. They really give the production their all and I commend that. The Greek chorus style idea of having all the actors on stage throughout is well done and a joy to watch, giving the piece if not uniqueness, then great pace. Also, the focus on small everyday moments and stillness from the actors gives a very modern and gripping sense of the world the play inhabited. Like a shockingly attractive but shallow model, the play is enjoyable to watch, but the poor choices let down the incredible skill and effort that a vast majority of those involved put into the piece.

Overall although a tear was almost wrung from my cynical eye, the production doesn’t support the wonderful work the actors were putting in. When doing a reproduction of a film that’s reproducing a book, the play version needs to bring something new and exciting to the two previous re-incarnations of the story. We need to be reminded of the worth of live theatre, and this production sadly doesn’t do this. Yes it’s pleasing and yes it has some very important points to say, but so does the film and the book, this is less an addition to the history of the tale but more a footnote. I would say, save the money and watch the film.