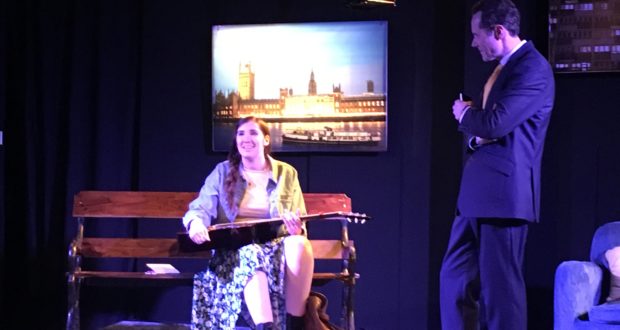 Reeling from the death of their mother, Scottish musician Alannah (Natalie Allison) moves to London looking to support her troubled brother Tommy (Ryan Williams). A chance encounter with the idealistic leader of the Liberal Democrats, Christopher (Stephen Ashmore-Blakely) leads to a romance. On the other hand, his loveless marriage to his Lady Macbeth-Esq wife Helen (Stephanie Lane) begins to crumble around them as he begins to develop feelings for Alannah. So far, a meaty mix of emotional clout and sweeping love story.

Set mainly on a bench just across from the Houses of Parliament the set consists of the bench and a sofa. Apart from some rather cheap and unnecessary prints of the view John Savage’s set is clear, if not inspired. Furthermore, Nick Insley’s lighting and Ruth Sullivan’s sound again demarcates the locations well.

The problems begin with creatives choices, writing and some of the acting. Nicola Rockhill’s directing is very static and doesn’t give the drama enough space to breath. Some choices are just odd, such as having Allison utilise her admittedly crystal-clear singing voice while badly miming playing the guitar (for an aspiring busker, playing guitar is rather important), Yet having her brother (apparently unmusical) playing it perfectly for only one small section. Neither does Jonah Maddox’s music add much to the piece as the songs are ungrounded by any accompaniment and not particularly memorable. Coupled with amateurish set changes the overall effect gets watered-down.

The main issue though is the lack of emotional connection. The love affair feels inevitable and awkward. This might come from Sal Fulcher’s overly heavy writing. At points funny and topical but always a little weighed down and unedited. It may be laid at the feet of directorial issues mentioned or just a lack of connection between Allison and Ashmore-Blakely. Coming in at almost two hours this is a long show for a small space and although the cast try their best the audience is lost in a story that has nowhere else to go (literally and figuratively).

The show deals with mental health, gambling, addiction, grief, marital responsibility, political validity, and idealism. It is well-meaning and at points heart-warming. Ashmore-Blakely is convincing (if not likeable) as the conflicted politician and despite being a touch Machiavellian in her mood changes Lane provides the perfect anthesis to the free-spirited Alannah. But it is in the brother-sister dynamic where the play finds its most genuine sections.
Despite a valiant effort by cast and crew, A Westminster Story gets lost between the hustle and bustle of its many ideas and aims. Jostled by some strange creative choices and eventually descending into farce as the intensity is ramped up for the crescendo. With the thwarted lovers left alone on the Embankment, the final image should be heart-breaking, unfortunately, it proves to be only anti-climactic. Another love story in the city that gets lost in the crowd.