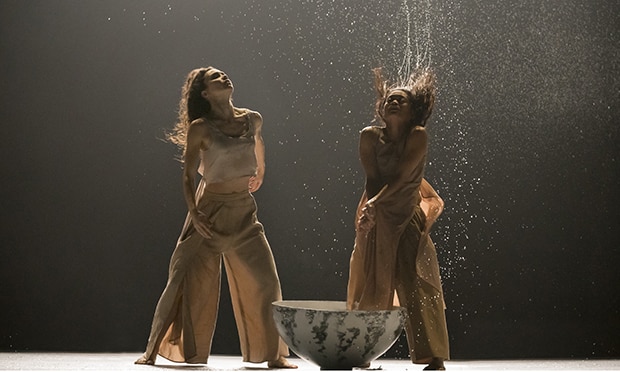 Reeling in and out of the work and life of the mother of modern dance, Isadora Duncan, the Viviana Durante Company provides a triptych of epic proportions, titled Isadora Now.

A passionate evening mirrors the bold existence of this pioneer.

Starting with the past, we see The Dance of the Furies, originally choreographed by Isadora herself.

This is precisely what you would imagine when you think of the Duncan technique. Like the witches from Macbeth, secretive forms crawl out from behind pillars and gather around a real fire pit.

Long, trailing dark hair and clawed fingers recall something animalistic, wild and ugly. Although predictable and at times melodramatic, it is important to ground us in the contemporary pieces that forged her success.

For the stuffy world of 19th-century ballet this was scandalous. With ‘Orfeo ed Euridice’ by Christopher Willibald Gluck pounding out in the background the drama is high from the very beginning.

The dance is lively, emotional and strong, providing once again Duncan’s idea of the female body rejecting everything expected of it, both then and now. It is telling that even in our “enlightened age” it’s still arresting to have so many female bodies dominate a space.

The pitfalls of the Duncan style do peek out from under their chiffon Greek dresses. The mannered choreography and at time overly symbolic poses grate a little.

The next piece only goes to underline these issues. Begoña Cao (standing in for Viviana Durante herself) is Duncan resurrected from the dead. In a plush gown and accompanied by Anna Geniushene on a large grand piano, she transports us to a private salon in Paris or London for an intimate look at the Five Brahms Waltzes in the Manner of Isadora Duncan.

Cao embodies Duncan wonderfully. She floats, contorts and twists, scattering petals at one point and then interacting with a flowing silk scarf a little on the nose considering Duncan’s tragic death) the next. Although this is stunning, I start to wonder where the ‘Now’ is from the title of the piece. Finally, after the interval, it is delivered full force.

With choreography by Joy Alpuerto Ritter and live cello and loop-pedal soundscapes from Lih Qun Wong, Unda is the highlight of the evening without a doubt. Taking Isadora joyfully into the 21st century, the dancers bewilder.

Like tracking rivers through the land to their source, the legacy is written in the ever-evolving history of dance. Voguing’s expressive hand movements, hip-hop’s locking and reverberation of body, Pina Bausch’s obsession with hair, contemporary ballets – everything.

All the permutations of modern dance claim some link, whether in reaction to, or implicit influence by, the ground-breaking work of Duncan.

There is still the thrashing of matted locks (dry shampoo anyone?) and stylised movement, and the whole evening never escapes from the cliché of thin beautiful women looking angular. Nevertheless, the mix of live experiential cello with heavy thumped electric soundscapes makes for a thoughtful interpretation.

This piece is both unexpected, challenging and layered, and a mesmerising way to end an evening, expertly showcasing the breadth of this extraordinary woman’s artistic legacy.

As Duncan said in a 1903 lecture: “For art which is not religious is not art, it is Merchandise”.

In this case, Isadora Now well and truly took us to church! Let’s raise a glass (of champagne, please) to Isadora Duncan – almost 100 years on and we are still under your spell.

Isadora Now ran until 29 February at the Barbican.