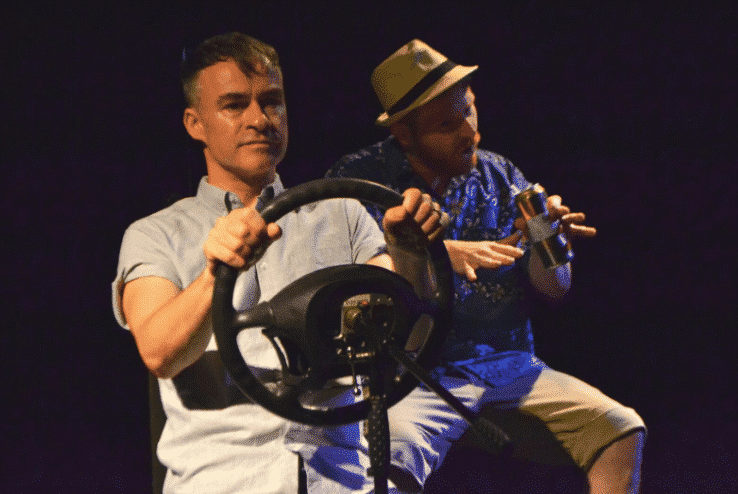 “What is going to happen to us all?” a plaintive call that echoes throughout the complex and heart-wrenching Bluebird. This is far from easy theatre and can sometimes feel like you are being emotional bashed over the head with a frying pan. Hard-hitting, bitingly written and with a cast that just won’t quit. Seriously what more could you ask for?

Well there are some things one could ask for that aren’t there, so let’s start with them? We follow a taxi driver’s poetic and darkly humorous conversations with his “fares” for the first part of the play, (we will talk about the second act later but be ready.) The set is fascinatingly in the shape of a cross with audience members sitting in a clump on one side. This is a really interesting way to give momentum to a very static piece in theory. Unfortunately, this proves to be clumpy and provides some rather annoying sightlines for all audience remembers throughout.

The set changes are cramped and blocky, and the stage feels very claustrophobic. There is also looped music, just a touch lazy, especially when you can tell that it’s looped (a pet peeve of mine). Everything can be tightened up a little; fitting the sleek writing with an equally sleek production style will be a wonderful improvement.

Another problem I have, and this is assuming other people’s theatrical tastes, is that THIS IS NOT A HAPPY PLAY. I would repeat but I think you get it; it twists the knife slowly in your very core. The play builds in dread in the second act through the episodic taxi sections by fleshing out the backstory of the lead character Jimmy. The second act is where your heart is crushed under iron boots of misery; we have betrayal, rape, drink problems, drugs, pain, violence, guilt, tears, drunk driving, graveyards and the death of a child (all of which you would expect from Simon Stephens.) There is a Pandora ’s box of hope and redemption lurking somewhere, but this is heavy going stuff and takes its toll visibly on the audience. Even my cynical eye is pretty much a waterfall throughout the second act. I don’t want this to discourage people. This is a clever, wonderful addition to Stephens’s glittering career, shining bright in all its shades of misery. It’s poetic, funny and terribly sad and is a love song to the nation’s capital that will break your heart with all the tenderness of first love.

Stephens’ writing sings with its normal cutting buzz, while twinning humour and darkness expertly. This production is a tour de force with every actor giving an extra layer of skill and meaning to the roles. Overall a very high-quality production from everyone involved (apart from the set changes). Also, the timing of the play is perfect, putting on a play in a wonderful reused church in Mudchute in the middle of a sweltering summer, genius! Overlooked by the towers of Canary wharf, this play is set in the heat and heart of London and there is no need for much imagination, we are there!

The performances that really stand out and dominate the second act are the two leads. Jimmy, played by Jonathan Keane, is a slow starter; dry, jaded and chased by unseen demons, he plays the stern cabbie very well. We then get to see a softness blossom that is truly magical to behold. An origami-like unfolding that is masterful. His breakdown and the energy supplied by his estranged wife played by Anna Doolan, creates the emotional sucker punch that does let you escape without unscathed. Doolan’s acting is without fault (and it’s rare for me to say this) and is simply sublime!

The way the production really glows with potency is in its discussion of modern life. Stephens’ wonderful writing carried by some truly outstanding acting creates this broken view of modern Britain, this landscape crafted by pain and suffering that we all try and ignore, where human connections are fleeting but highly charged. Bluebird’s exploration of the way pain twists humanity is fascinating, and if a good production is measured by how effectively is gets across its themes, how immersed its audience members are, and how many liters of tears it produces, then this play scores highly. A wonderful mixture of sweet and sour (mainly on the sour side), a love song to London and life, and the multitudinous forms of human feeling and emotion; I was moved truly by this piece and I know you will be too.

So yes, there is no such thing as perfection, and yes there are parts of this production that are less than perfect, but it still vibrates with an energy that good writing alone cannot give. I felt shocked to my very core and changed by this production and I hope you will too. Warning, be in a good emotional state for this play as you will take a battering. But the world can be cruel and hard and it is wonderful to watch a production face up to the inadequacies of our current state yet stand tall. Bluebird does that, just make sure you bring a hanky, you’re going to need it!

Bluebird is playing at The Space