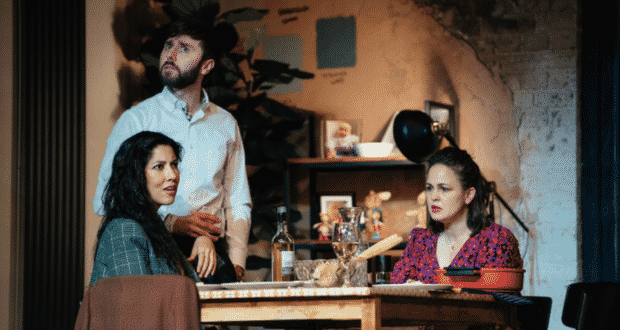 Making the long 5 minute commute from the Noel Coward theatre to the Gielgud and on the way changing cast (bye-bye Lily Allen), 2:22 reopens to much acclaim, proving that in our dystopian present the ghost story still has the power to delight.

Rather like a mix of Who’s Afraid of Virginia Wolf and The Woman in Black, 2:22 A Ghost Story concerns young parents Sam (Elliot Cowan) and Jenny (Giovanna Fletcher), who throw a dinner party in their new half-renovated Victorian terraced house. Their friends Lauren (Stephanie Beatriz) and her partner Ben (James Buckley) are drawn into a nightmarish battle for sanity amidst spooky goings-on. Picture popping round for prosecco and being greeted by possession.

Anna Fleischle’s set is naturalistic with a disquieting angle. With paintwork peeling, this half-dismantled 70s home is a perfect everyday setting for a ghost story. The space looks off, but subtly, and the spinning actions of the characters are contained within the open plan but strangely claustrophobic kitchen-cum-dining room.

Danny Robin’s writing provides more social commentary than your average horror play, and certain actors embrace the mouthy script. Buckley, playing the new builder boyfriend with hidden spiritualist depths, has a biting monologue about class and gentrification. Beatriz as his girlfriend, trying her best to drink through the evening, shows heartbreaking moments of honesty.

Yet most of the action rests on the haunted couple. Cowan provides a great range of emotion as the enigmatic, rational and rather smug Sam. Unable to see past his purely realist outlook, his push back against the others creates a nice to-and-fro throughout the piece. Fletcher, as his wife Jenny, starts with her energy far too high and therefore has nowhere to go. The lack of fluctuation within her performance means the character comes across as far more two-dimensional than the others.

Horror plays have never quite taken off the way their film and book counterparts have. Like the boom in spiritualism after each world war, maybe our current battle with the pandemic will fuel people’s need for a good scare. Against its horror play counterparts 2:22 is more muted: a good twist and some lovely old-fashioned theatre magic are not over-ladened and the script is much wittier. At points the dialogue does get a little sludgy, and some of the jump-scares feel unconnected to the action, lazy and repetitive, but the focus on people over the paranormal is interesting. A supernatural tale for the modern world perhaps, as the characters, in the process of ghost hunting, unwittingly find out far more about one another than they would want? And as the saying goes, hell is other people.