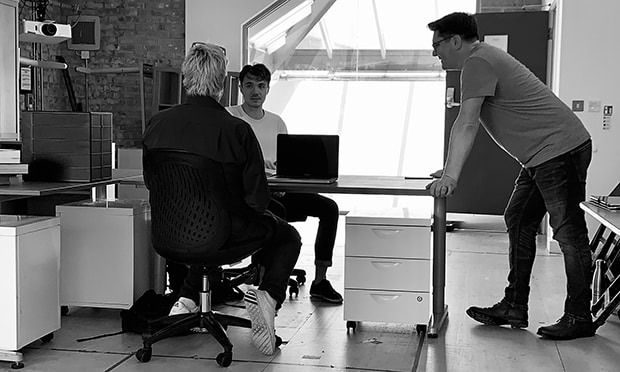 No! I am talking about the isolated Channel Islands, the setting for When Darkness Falls – a ghostly evening of bad weather and gifted storytelling.

We are greeted by Justin Williams’ fastidious naturalistic set, with a ragtag office filling the Park Theatre’s thrusting stage.

An ageing historian played by Will Barton grapples with filming a vlog and is joined by a handsome paranormalist played by Alex Phelps for five blood-curdling tales.

While there are clear parallels to 39 Steps and The Woman in Black (albeit on a tighter budget), what sets this piece apart is its writing and its simplicity.

James Milton and Paul Morrissey have wound a terrifying and intricate set of stories around the myths and history of the Channel Island.

The tale of the burning at the stake of Perotine Massey is horrifying and utterly based on truth. The three-hour ferry to the archipelago seems to have kept hidden some fascinating titbits that the writers use to full dramatic effect.

Horror plays are sadly a rare genre, on-stage magic being notoriously difficult to do and normally only attempted by big theatres or touring productions.

Considering this, John Bulleid’s illusions here are subtle yet very effective. Coupled with some imaginative use of light (Bethany Gupwell) and sound (Daniel Higgot), the whole production is a slick and well-paced ride of terror.

Everyday objects are wrought through trickery, light, and sound into vehicles full of freight, and the busy space bustles with multi-purpose props and dying wreaths of smoke.

The office transforms into a Nazi-built underground hospital and then into a stranded fishing boat with ease. The space unfolds in seconds thanks to the technical genius of Gupwell, Higgot, and Bulleid.

Performance-wise, the pressure is on the two fellows. All the atmospheric lighting and clever wordplay can be dashed on the rocks without some strong characterisation and brooding glances.

Phelps provides this unequivocally. Understanding the audience is on three sides, he varies his delivery nicely, able to build intensity and smoulder – very much the Byronic hero telling a ghostly tale on Lake Geneva. He chills and is chilling, a confident and controlled narrator.

Barton is energetic but is rather too forward-facing, meaning us poor mortals to the side don’t receive much action. Furthermore, although he shifts with ability between characters, this could have been extended a little more to clarify who we are watching at certain moments.

Morrissey has a good understanding of the rules of horror, and the whole affair is genuinely frightening. There are jump scares, bubbling dread, and historical intrigue aplenty. Despite some rather repetitive blocking, his direction masterfully pulls you deep into the stories.

Not for the faint-hearted, When Darkness Falls is a historical wander down a dark lane, with a terrifying secret lurking in the bushes at the end. Something about being immersed in the tale is always guaranteed to increase the interaction tenfold.

For a rare evening of clawing shadows and flashing lightning, scurry along to the Park Theatre before the run ends tomorrow, and brace yourself for the storm.