Janis – Tomorrow May Be My Last 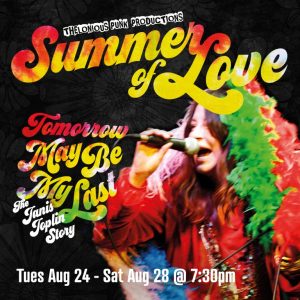 One of the most tragic and emblematic women of the 1960s, Janis Joplin holds a piece of many people’s hearts. Wild and ferociously talented, she and her era are hard to re-create at the best of times, never mind in the tunnels in Southwark. Collette Cooper becomes the superstar but is hindered along the journey.

Overdosing at 27, Joplin’s bluesy vocals and heartfelt message resonate through time. The drugs, free love, energetic stage performances and California state of mind. The summer of love can be interpreted in all its contradiction and complexity, or via stereotypes and platitudes. Sadly, this production goes down the route of the latter.

The saving grace is Cooper’s impressive vocal and acting ability. Producing the raw gravely tone of Joplin is no mean feat and I take my flower crown off to her. All the classics are re-created with energy, passion and skill. The band, lead guitar Jack Parry, drums Jan Simson and bass guitar Daniel Malek equally keep up with the technically demanding songs.

Yet this is an hour and a half straight through, so there is much more than just the music. Cooper’s characterisation is impressive, nailing the mannerisms and the distinctive cackle uncannily. Her writing, however, is not at the same level. Coming off more like a list of Joplin’s achievements, sections are repeated and lost in the ongoing mess of the monologues. We are not sure where Joplin is speaking from, death? Backstage? And not even sure why she is speaking to the audience at all.

The direction by Cooper and Niall Phillips is equally unclear. The play tries too much and in the limited space produces a disjointed effect. A chorus of “hippies” are barely utilised, unless they are playing inexplicable demons of Joplin’s past (in plague costumes?) or police (in Chippendale-like uniforms?).

Star Eddy and Bree Smith have celestial voices but are reduced to backing dancers and blunt cutouts of 1960. Attempts at audience participation are distracting and the final free-for-all dance section feels a little foolhardy considering the raging pandemic.

The play needs to clarify what part of this enigmatic woman’s short life it is focusing on, and trim down the monologues. Cooper’s voice is outstanding and does make you feel like Joplin is resurrected from the dead. However her prestigious talent alone is not enough to break this particular ball and chain.