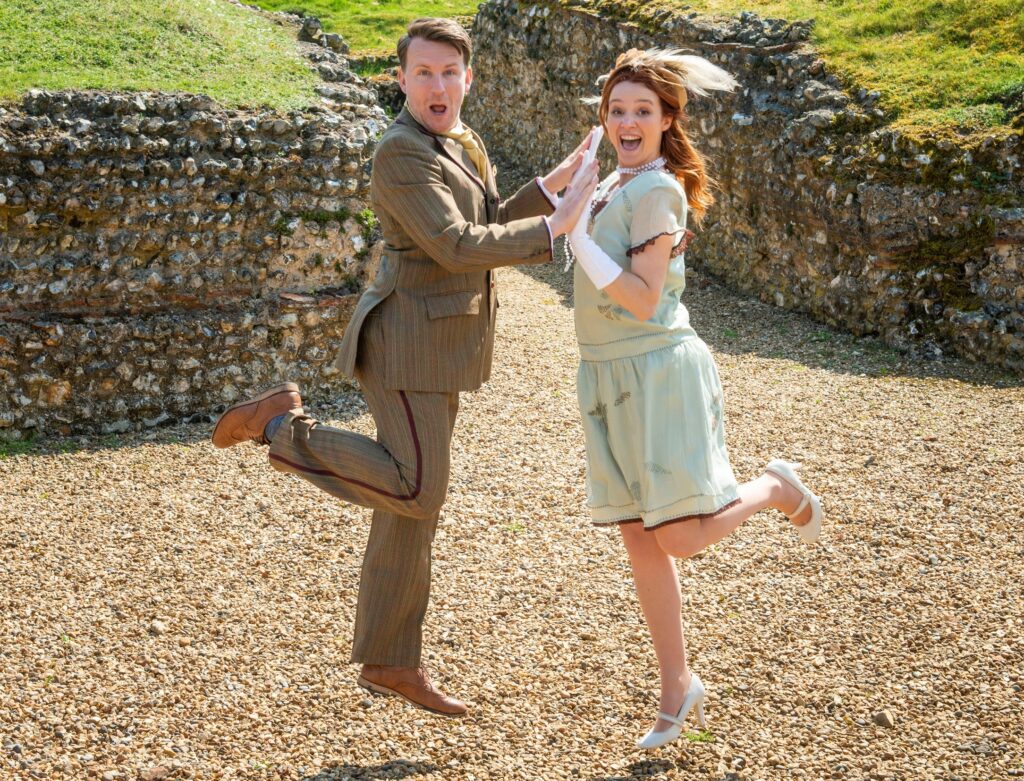 The tale of deception in the upper classes is given a roaring 1920’s overhaul. Much like the pace of the jazz age the production races around with frantic energy putting on the Ritz. In the process losing some shades of meaning.

Oscar Wilde rightfully seizes the name of wit. His work is infused with the dark contradictions of the Victorian era as a writer forced to hide a large part of himself. The importance of being Earnest is a tale of duplicity and a difficult one to get right.

Amidst the roman ruins of St Alban’s amphitheatre, in what felt like a hurricane of flying ants, The Malting Theatre attempts this most tricksy work.

in this Wild-ian spin on the mistaken identity trope, good honest Jack Worthing (country esquire) morphs into his hedonistic brother Earnest to galivant around town (London). When love arrives on the scene the pretence is stretched to the limit with hilarious consequences.

This recontextualisation pushes the play back in time around 30 years (1890-1920). Simon Nicholas’s set is simple but flexible in showing a lush art-deco London apartment and the wisteria-adorned garden of Jack’s country estate in turns.

Adam Nichols and Matt Strachan’s vision is an ambitious one, and we like ambition. Pushing the rigid tale into the 1920s allows for a freer physicality. The edition of modern music sung/played live (with varying results) by the cast recalls Baz Lehrman’s 2013 film The Great Gatsby. When it works it is rip-roaringly funny. Lady Bracknell the austere matriarch holding all the power over our hero’s future matrimony singing Lizzo Blame it on my Juice is one such moment. Eminem and Beyonce’s songs explode on the stage, certainly unexpected!

Unfortunately muddled between all this ambition is a slight disconnect from the story. The focus on the humour and innuendo of the script means that a lot of historical reality and believability are sacrificed. Wilde is a masterful wordsmith, and to labour his prose risks losing a lot of the subtle meaning. There is a tendency to throw everything at the wall. A random tap section along with blocking issues means that the gamble doesn’t always pay off.

Nevertheless, some actors sparkle. Anna Franklin as Lady Bracknell has the lion’s share of the epigrams. Commanding the room, she calls the shots. Understands the flow of language. Inhabits the character expertly, and keeps us laughing throughout. Emilia Harrild as her daughter Gwendolen carries much of the vocal work in her low and sultry tone. Her assertive, dominating interpretation of the character brings to mind Greta Garbo in her suits. Although she does (like a lot of the cast) fall into melodrama at times it is a novel spin on the love interest.

The production focuses on the power of the female characters and the effeminacy and louche nature of the males (rightfully so). Lyle Fulton as Jack/Earnest gives the most stripped-back performance. Believable but looking a bit out of step with the larger-than-life characters around him. Charlie Clee as his friend and fellow trickster Algernon has a playful twinkle although overdoes his physicality. A scene where they battle over a plate of muffins brings out the best in both and is a highlight.

Emma Wright and Jon Bonner as Jack’s ward’s governess and the local preacher steal a scene as they sip whiskey on one of the mounds high above the stage. This and another moment are the only times the unique topography is used.

The predisposition for melodrama already mentioned is an overall problem and trickles down throughout the production. but the aim to amuse is hit with great energy and gusto. Live music, Charleston’s, witty repartee with views of the rolling British countryside. This production will keep you guessing. As the lights dim, and the sun dies behind the ancient wreckages of earth I wonder; would the ghost of Wilde enjoy the evening? A flying ant hit me in the eye just then, and the question floated off into the night.

London Palladium A high-intensity, full-on production that might please the kids but is definitely starting to feel dated. The acclaimed,