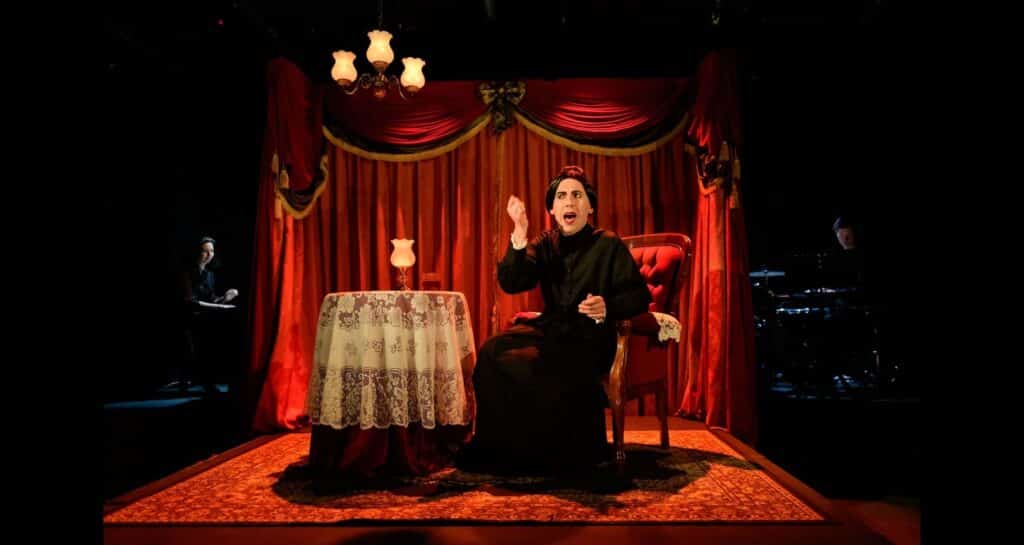 Bones are good, Structural, essential, underpinning. But what if the skin… could do with some moisturising? Streamed from the Southwark Playhouse The Fabulist Fox Sister has some potential deep, deep down, and that’s what counts? Right?

With music by Luke Bateman and both book and lyrics by Michael Conley (who is also the lead – alarm bells yet?), this irreverent, dark twist is loosely based on the very real lives of the mothers of spiritualism, the Fox Sisters. Adopting a very American swing, the tale is drowning in lies, betrayal, booze, and of course money. All of this accomplished by one man? We’ll see…

Good bones: well the concept is a gold mine – a one-person musical, comedy, tragedy, plus one very bad wig, beamed straight into your home. Interestingly, all the camera angles choices are made entirely for live streaming, whilst the fine musical accompaniment comes from gifted duo Tamara Saringer on keys and Becky Brass on percussion. Less interestingly, canned laughter is used at perplexing intervals.

But the issues here are believability and focus. Firstly, despite Conley’s undeniable comedic ability, he is not an effective Kate Fox. Looking like Miss Trunchbull from Matilda, but with the shiniest wig known to man, the effect is visually confusing. Match that with a singing style like a budget Liza Minelli, and a delivery imitating Sasha Baron Cohen, and the choice of lead muddies the focus of the piece.

Now, I LOVE drag, but the clumsy theme of smoke and mirrors doesn’t justify the use of it within this context. Conceivably, it is making a mockery of the hard and tragic life of this woman. The ugly face of misogyny rises, and the cheap laughs feel very much at, and not with Kate Fox.

A lack of connection with the character partly derives from Conley’s script. It is littered with gratuitous swearing, and modern turns of phrase that yank us from the historical setting indicated by story and costumes. Clearly, Hamilton has set an interesting, but sometimes dangerous, precedent for reworking historical stories. When effective, this approach can sharpen a story to a political point then impale us on it. Yet without a clear intention, you can sail blindly into dangerous waters. These were real people, and if you blithely throw out any sense of reality you sure better have a good reason for it. Lazy mistakes litter the script, such as a song being about Jim Beam, when that brand name only came into use in 1943.

So maybe there’s some arthritis in them bones? Nevertheless, there are glimmers of potential. The songs “If they believe” and “Built for better things” introduce musical swing and a both have a catchy hook. After this, the pace warms up considerably, although the ‘interactions’ with Kate’s dead sisters could be heightened to create an interesting beyond-the-grave trio. Another nice touch is the final rapid set transformation; but again, this could have been expanded on.

Although the attempt at dark humour falls flat overall, this may be down to the medium of viewing more than the subject matter, as lines like “Maggy died, she fell off the wagon and then fell off a wagon” are undeniably funny.

Mostly, this musical needs to work out is what it is trying to say. By ridiculing the Fox women, what are we learning about the time they lived in and the lives they led? What does that tell us about our own time? In the end, at what expense are the laughs bought, and who pays the price? In the show’s current incarnation these questions remain largely unanswered.