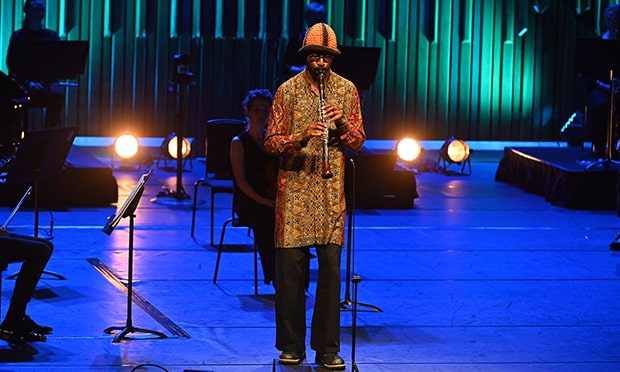 Hutchings himself welcomes us to the concert, smiling as he emerges out of the foliage of the Barbican’s conservatory. This British-Barbadian prodigy defies musical boundaries and, like other famous jazz musicians of the past (Benny Goodman is mentioned a lot), uses the spirit of jazz to give classical music a bolt of electricity.

Jazz gets a bad rep for its esoteric joys and pretentiousness, but thankfully all that is absent in this concert, which blends some of the fieriest jazz-inspired pieces with some of the country’s best performers.

The hands of Cambridge’s first-most orchestra, the Britten Sinfonia, dance in a frantic ballet as their shadows flicker across the walls of the hall.

Aaron Copland’s Appalachian Spring kicks things off. The ballet was commissioned by Elizabeth Sprague Coolidge in 1944 to invoke “‘the legend of American living”, in a collaboration with famous experiential dancer Martha Graham.

Although the title suggests the rocky spine of the American mountain range, it was picked by Graham shortly before the premiere as a phrase from a Hart Crane poem, The Dance.

Like morning breaking between two hills, the piece slowly builds in tempo, with bursts of calls and response between the strings and woodwinds. Always flirting with discordance, pulling the orchestra back into the realm of pleasant listening, the jazz influences are clear.

The playfulness of collapsing motifs, coupled with a shameless use of known elements such as ‘Tis the Gift to be Simple, Lord of the Dance and Gershwin’s Rhapsody in Blue is what is so distinctive about this work. This singular representation of the American dream has all the confidence, brash bravado and hidden complexity you would expect.

Marching onto the stage, Hutchings is dazzling in a silk printed shirt, thick-rimmed black glasses and orange beanie.

Igor Stravinsky’s Three Pieces for Solo Clarinet are not only physically demanding but also of historical importance, being the first concert pieces written for the clarinet alone.

With the undulating sound, trills and cries of the instrument are offset by the low almost guttural style of the first piece. With a frantic building of energy, the last piece feels like an angry call to arms blasted out into space.

Hutchings treats us to an improvisation next. Maybe unfairly, musical improvisation brings my shackles up, yet watching him do battle with the instrument, I am deeply impressed. Unlike the piano or singing, the demands of the instrument are written on the face and body of the musician. The cheeks puffed, veins standing to attention as a single drop of sweat rolls down his clavicle. Watching his concentration in the musical maelstrom is engrossing.

With its versatility and power, the clarinet can easily dominate the space, winking in the limelight. A quick pre-recorded chat between the conductor Geoffrey Paterson and Hutchings sits strangely in the middle of the concert, but might be a chance for a seamless roll-on of the other instruments? They discuss the spiritual idea of improvisation and explain the unique quality a jazz musician can bring to a stationary piece.

We end with the Clarinet Concerto by Aaron Copland. A slow, sombre and resonant beginning, with clear lead from Hutchings’ clarinet stirring up the pool of the orchestra into a swelling undercurrent, like an army ready to pour after their hero through a crack in the city walls. The clarinet leads the charge, with strings, woodwind, harp and piano plunging in afterwards in a plundering cacophony.

Purples lights set the scene as the wistful and optimistic score fly this way and that. With a nice use of camera angles and close-ups, we almost feel in the hall with the orchestra.

Together, the talent of Hutchings and the Britten Sinfonia extend the far-reaching arms of the genre. Born of a world in turmoil, it’s fitting that jazz’s untamed spirit would resonate with a 2020 audience.

Yes, the shrieks of the clarinet can still be a little shrill for my virgin ears, but its frantic thrashing is unlike any other instrument and, in the right hands, is transcendent.