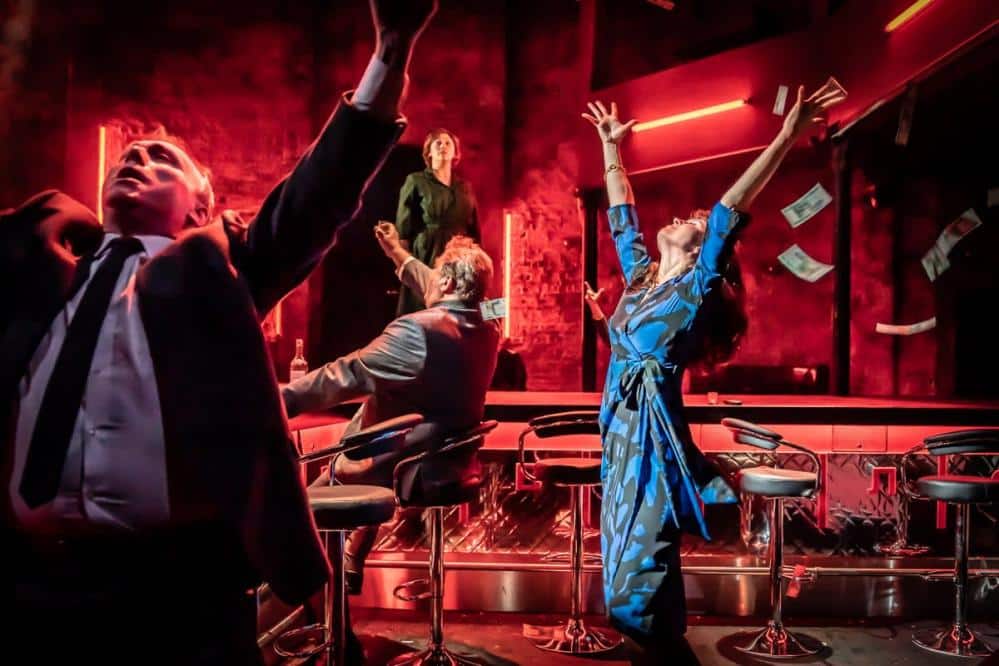 “Russia has spent so long as an empire she doesn’t know herself as a country” A dire warning for our current European political woes, and a sentence synopsis of Peter Morgan’s newest masterpiece. The well-heeled collection of the “Glittering British elite” (the play’s words) shuffle in their seats, a fitting audience for a story of rampant capitalism.

Like much in our over-saturated, colour TV sphere we are directed to what the media wants us to focus on. Snippets and snatches of the full story glide at us in a desperate attempt to elicit a response. I understand that I am in a small way part of this circus, but a very minor juggler. Understanding Vladimir Putin’s recent imperialism takes a good grasp of the breadth of Russia’s 500+ history, a time-consuming task indeed. Or one could simply watch Morgan’s expertly stitched drama at the Almeida. Your choice.

Unsurprisingly from the writer of Netflix’s The Crown this piece is a tour de force for all involved, which is a nice thing to be able to say, isn’t it? Morgan’s writing is funny, laden with metaphor, making the historically murky clearer (at least within its theatrical context). Rupert Goold’s affinity for making the medium-sized space seem limitless is impressive. How does he do this? you ask. Well by heavily limiting the space ironically. Miriam Buether’s set is a large red (of course) cross of bar-top/stage, surrounded by 90s stools and blood-colour underlighting. Think part Strip club part courtroom. There is a black simple staircase stage left, and a box floating stage right that serves as a television studio come submarine. That’s it.

Inside the political battles cross back and forth, desks glide into centre stage, and two large swinging doors reveal a full-length reflective surface behind them. A prop that proves important for a certain disgraced leader’s self-creation. They do it with mirrors indeed. The rest is Jack Knowles’s pointed transformative lights, live sung music, and sheer acting ability. We traverse from most northerly Chukotka to drizzling London, from on top of a mountain to the bottom of the sea, in an instant with very little fuss or flourish. This piece’s cogs are well greased with the oil of the Ural Mountains.

Boris Berezovsky was a businessman, emerging to power in the chaotic 90s as the Soviet Union dissolved and crashed to its knees. Serving as a Krysha (roof); a Warwick-like kingmaker, political ally, and parasite/thorn-in-the-side of both Vladimir Putin and Roman Abramovich. His rise through the government of Boris Yeltsin and subsequent fall in the government of Putin is shaped exquisitely by Tom Hollander. More than a greedy oligarch (maybe), he gives depth to a deeply unlikeable womaniser, embezzler, and autocrat. At the same time a mathematical genius and by his own statement a devoted Patriot. Hollander enchants us, pulling us into the casino capitalism of the period with such charm, colour, and conversational dexterity.

Will Keen as Putin shows the progression from lowly deputy mayor to a totalitarian leader in incremental jumps. His posture solidifies, his shoulders broaden, his frame bulks, this is Hulk-level change all by the power of physicality. Likewise, Luke Thallon blossoms from the dorky “kid” Abramovich to a kleptocrat able to destroy his former Krysha in court (no spoilers in political theatre).

The story is pointedly sparse with female characters, reflecting the at times misogynist history of modern Russian politics. Aoife Hinds as Tatiana Yeltsin (one of the few to break through into the boy’s club) is engaging. Yolanda Kettle (in tandem with Jamael Westman) as Maria and Alexander Litvinenko provides the only (doomed) love story. Although the choice of northern accents to demarcate class is a little tired, no?

Hollander sitting in his spider’s web, a modern Rasputin, and role of a lifetime. Yet he and Keen do have a habit of falling into the play’s only trap. The text, poignant to the war in Ukraine, self-aware with nodding winks out to the audience becomes at times overladen with dramatic irony. Berezovsky calls Putin “clearly a decent man” and doesn’t quite live to regret it. Although the writing is more facetious than a story of political greed/corruption should be the knowing winks become a little soupy. Impeding the furious pace kept up throughout.

Russian history has been dominated by a ludicrously small group of people. The 1917 revolution arguably just changed the people, with the 1990 upheaval changing them again. But this play is not trapped in the dusty annals of time, but less than 20 years ago. A history that is very much affecting the world we live in, ripping it apart, poisoning its tea, unsettling its foundations. What it does remarkably well (for an English author) is to deconstruct what Patriotism means to Russians. A cover for greed, a channel for pride, a feeling, or lastly and most dangerously, something to die for? Although theatre is not documentary, documentary is not history and history is not fact, this play is a must-see for everyone worried about Europe’s future. Although I warn you, it will only make you feel worse.

London Palladium A high-intensity, full-on production that might please the kids but is definitely starting to feel dated. The acclaimed,