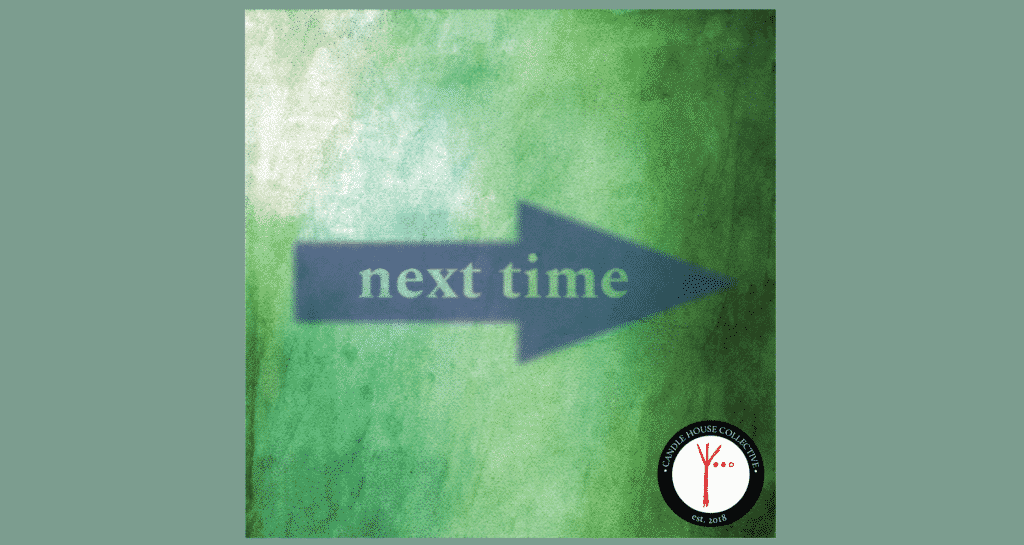 Blending the zany sci-fi humour of The Hitchhiker’s Guide to the Galaxy with the equally offbeat cheeriness of The Good Place, then pour that cocktail of wacky-fun down the phone lines for your enjoyment. That Is Next Time.

Having improved considerably on their previous show Claws, Candle House Collective has lightened the tone, choosing comedy over horror, with magnificent results. Their pioneering grasp on the remote experience (otherwise known as a phone call) market has tightened even more so with this piece. One hopes that the lifting of lockdown (suddenly closer on the horizon) will invigorate this budding new theatre sub-genre.

Sitting alone in my bedroom, headphones plugged into my phone, a writing pad in front of me, I have an odd feeling. Am I finally losing it? Has lockdown got me so desperate for human contact that I’m willing to be effectively prank called by a total stranger on a Saturday night? Dreading the call and envisioning the potential awkwardness that could follow I am instead tipped headfirst into the hilarious and well-crafted world of “The Bureau”.

In the capable hands (or voice) of my caseworker, Katy Murphy, she gleefully guides me through the Brazil/Kafka-Esq inner workings of a bureaucratic alien conveyor belt of entities. The concept is not particularly novel, it’s been covered by greater minds and in more depth, from Jean-Paul Sartre to Dante. It seems that to examine the life-here-after and to do so as a comedy is a most human temptation.

What sets this work apart is firstly Murphy’s natural grace in crafting the narrative to each caller. Having only my own experiences to draw from the effects are disarming, funny, and at times beautifully intimate. My lack of ability with the mathematical tasks is cheekily brought back to my attention on multiple occasions, lightly mocking and always in the character of an inter-dimensional being. Captivatingly absurd, we are dragged through questions, galactic-wide mistakes, dealing with black hole interference and inter-dimensional admin. Murphy’s ability to retain the sense of the clown, yet tie the sci-fi details together into a cohesive story arch is amazing. She never breaks character, her cheery American pep and optimism fits perfectly within the premise.

Next Time asks its participants to gaze inward and to appraise their lives. Although sailing close to the wind of actual psychoanalysis Murphy’s corralling and John Ertman’s directing always keeps the impetus on the audience. It’s a personal choice to dive in as deep or as shallow as you wish. There is (thankfully) no uncomfortable mining for juicy personal revelations. The breaking of this heavy-duty mental work with silly games and easy (for some) arithmetic keeps the whole process zipping along.

Sound effects and extra characters help vary the tone of the phone-call. Initially, I thought 45-60 minutes might be a little too long but only on a few (small) moments does the experience drag. The only concept that doesn’t work completely is the attempt to discuss yourself in the 3rd person. An obvious tactic to allow you to be distanced from your own life, yet sadly due to lack of clarity this is dropped and then picked up again, which rather muddled the intended effect.

Overall, this whole jumpy, bumpy process is tied beautifully together with a side-splitting twist and a grand decision that asks you to examine your relationship with yourself. The whole experience is uplifting, unique, giving me a fresh perspective on the most important topic; ME. Neither heavy going nor depressing, Candle House Collective have found a winning star in Katy Murphy and a winning recipe in Next Time!

Dare I say it but it’s even worth the rather high ticket price, and that’s coming from me, an ironically cheap, mathematically inept, cynical theatre critic. Like blood out of a stone, Next Time has soaked my old worn heart in a bowl of warm theatre and softened it considerably. Thanks… I guess…