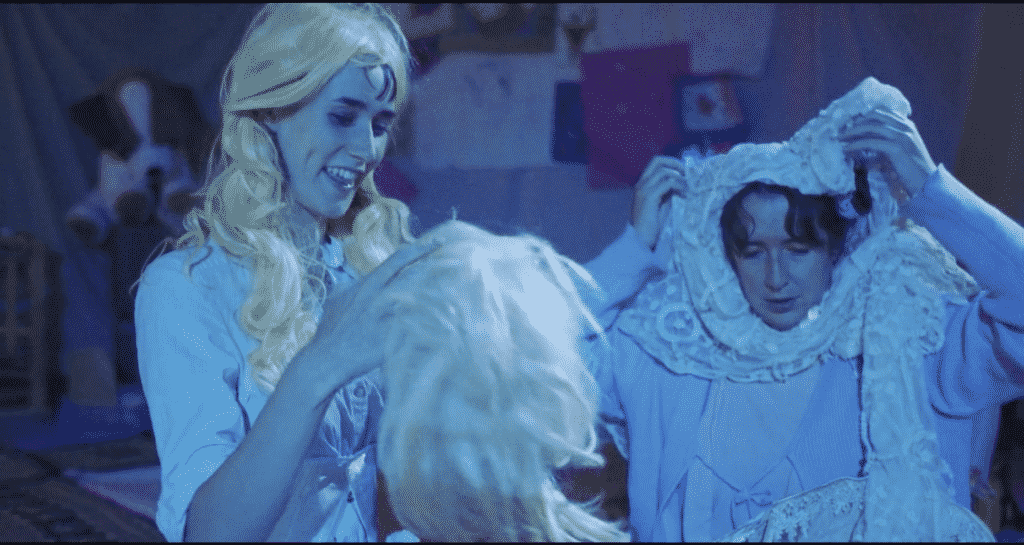 A psychopath and a shut-in reminisce about a deeply troubled childhood in this over-ambitious yet touching two-hander. Bitching and bloodlust blur the lines between friend and foe as two women grapple with the past.

With our oversaturated, desensitised modern minds I understand the challenge faced by a playwright. Staring at their laptops, trying their best to craft the twists and turns of a story that will shock, horrify and engage an audience. With such a daunting task, inevitably some pieces will overreach. One of these is Bored of Knives.

Written and starring Kitty Fox Davis & Megan Louise Wilson, Bored of Knives is set completely in a childhood den. This setting is a fairy-light-filled teenage girl’s fantasy, just with hints of a darker undercurrent. Such as a death wall naming everyone the girls want to kill. After ten years apart, the two meet in this space, reeling through old memories, past disputes and engaging in the kind of power play that only childhood friends can do.

The show is not without merit. Sophia Charap’s set sprawls out over the whole of the Greenwich Theatre, providing ample space for the girls to interact with and in. Sweet moments do tug on the old ticker; the intimacy of applying each other’s makeup, or getting drunk on home-brewed calpol-spritz (lethal right?). Both actors try their best to inhabit the roles and some good character groundwork is done. Fox Davis as the naive woman trapped in her childhood produces shed loads of pity, while Wilson’s snappy demeanour, especially her monologue on “getting a guy”, speak volumes about how damaged relationships can become.

Sadly it’s the script where the ropes begin to fray and obviously what everything else is built upon. It just isn’t a believable premise. Rarely do people commit a horrendous act, travel back to their childhood den, and neatly reminisce to their old best friend about what led them to the act that they are fleeing. The bricks of the character arches are noisily and visibly slammed into place, building us up to the eventual “shocking” culmination. But a tenancy to overact by the performers leaves you feeling disconnected from the story, and so relatively unaffected by the bloody conclusion. The characters are interestingly damaged women and the attempt to work out what ruined them should make for juicy theatre. But with an inconstant pace and lack of believability this impedes that aim from the get-go.

Matthew Ferguson’s use of some interesting camera angles (such as inside bags or boxes) is refreshing. Yet Tom Ryder’s direction has the women staring off into the middle distance and standing in very unnatural shapes, not moving, regrettably not making use of the loft-sized den around them. Plenty of props, colours, and side stories keep us busy but fail to keep the energy building steadily.

Nevertheless, it is admirable considering the show’s battle with Covid. It’s live run having been cancelled on more than one occasion, meaning that they have digitalised it instead. Despite some sound issues, they must be commended for their perseverance in the face of the global pandemic.

With a rather underwhelming fade-our ending it’s just something in the mix of sugary sweet memories and warm sticky blood that seems too bright, too overwrought and too extreme. More reminiscent of a Hollywood studio than the gritty psychological study that was hoped.