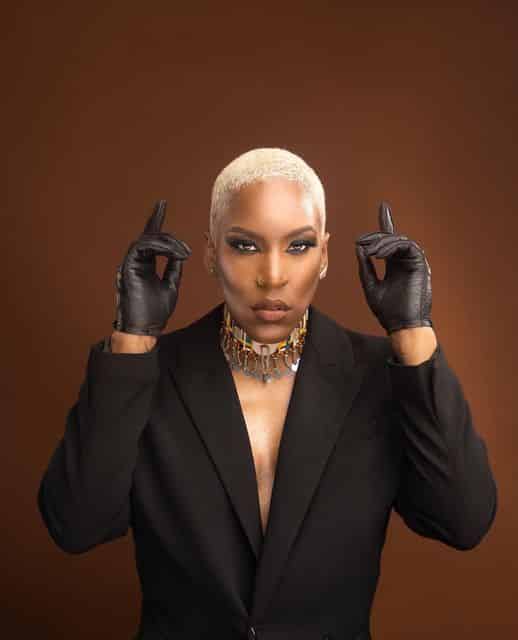 “Like a bee to some honey…..you got an addiction” we sure did, addicted insects, buzzing round the aura of Liv Warfield. The Unexpected singer is on a stratospheric rise, from an Illinois upbringing to touring with Prince and his band New Power Generation, and now solo. Along with playing Live on Jimmy Fallon, there is no stopping a runaway train as they say.

But I’m getting ahead of myself. Saturday night arrives with all its heady promise and tangy excitement. The Jazz Cafe’s cavernous atrium hasn’t taken on its slightly sweaty, swampy end-of-night state yet. The sound of the fancy folk enjoying their fare on the balcony above blends with the growing plebian crowd basking in the blue lights before the stage.

In complete contrast, Natalie May warms us up slowly, more of a light toasting with her flighty and breathy vocals. Channelling a diverse range from 90s hip-hop to personal spiritual journeys and Dora the explorer she stands in a white suit, with only an electric guitar for backing. Vocally stripped back and utterly charming.

We’re simmering, but unprepared as the hob is about to be turned to full and oil poured in. Warfield as master of delayed satisfaction kicks things off absent from the stage. Ryan Waters’s rocking riffs show us what real cool looks like. An American from Salem (no less), in a white wide-brimmed hat and matching outfit who can strum to bring down the heavens? Ice cold baby, ice cold.

On bursts Warfield, shaved and peroxided skull glinting in the stage lights, oversized white shirt, peaking leather corset underneath, and diamond bling weighing down each wrist. She instantly dives into the music. At the conclusion of her European tour, there is no fatigue or listlessness to this affair, all screeching trumpets, thumping bass, and meaty guitar. Bringing soul back to the days of Sister Rosetta Tharpe (just with much better clothes). Warfield’s vocals have echoes of Tina Turner’s edge, a splash of Beyonce’s versatility, and a sprinkle of Janis Joplin thrown in for good measure.

This is blues with a kick to it, passion, and at points a flare of anger. Why Do You Lie from her 2014 album The Unexpected is accusative and frothing with resentment. Although never passive in tone we collectively channel our own disappointed love losses into Warfield’s dynamic depiction.

Don’t Say Much from the same album is a seductive but pleading slow song about the need for physical intimacy. Proving that Warfield can bring it down as well as she sends it up.

Not overly hogging the limelight a whole song lead by Shaun Martin covering Bill Withers Lovely Day with a vocoder is another triumph to be added to the already popping evening. The many combined voices of the audience repeating the chorus reminds you of the beauty of people joined together by music. When Warfield launches onto the stage again we are attracted all over instantly by her clear love of performing and evident ability.

The Unexpected (from the album of the same name) is ironically as expected by die-hard fans; a knockout. Unsurprisingly as the late-great Prince along with being executive producer for the album also wrote this song. The building anthem drives the crowd into a frenzy, beer is spilled over Gucci loafers, elbows are taken to the face, and life feels limited to that one perfect moment of musical bliss. Warfield holding the centre in the tornado of sound.

Ending the concert with a fist full of flowers she seems everywhere at once although that might be the lukewarm Heineken speaking. She’s dancing in the crowd one minute, squirming on the floor of the stage the next, thanking us, and bigging up her band the next. Her effortless energy, style, and charisma radiates. Leaving the stage beaming we are left in the capable hands of the band, as they blast one final note, and the stage fades to black.

We have boiled over and now live on with only the memory of Liv Warfield. Until the next time, she’s in London of course! Where you’ll find me grinning from ear-to-ear in the front row with a half-spilled beer, ready to be captivated all over again.

Have a look at what’s on NEXT at the Jazz Cafe!