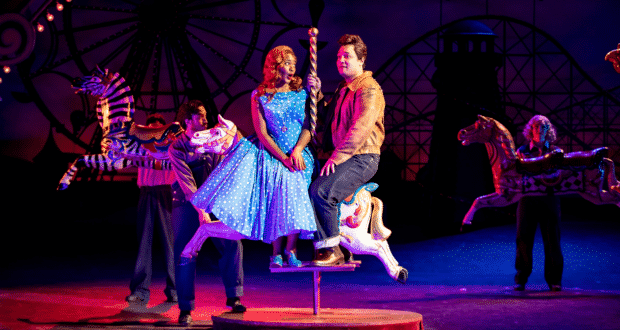 A brave new version of Wolfgang Amadeus Mozart’s comic opera somersaults into the English National Opera, steamrolling the gleeful audience in the process.

Amidst the crumpling chorus of Werther’s Original packets, the Sunday matinee crowd is ready for a classic. However, this innovative production of Cosi fan tutte is directed by Phelim McDermott of Improbable theatre company, and the visual sumptuousness of their previous work (Akhnaten or more recently Philip Glass’s opera Satyagraha) is recognisable throughout. Is there anything this company touches that doesn’t turn into theatrical gold?

McDermott and set designer Tom Pye save this performance from a lot of the trappings normally implied in its dark comedy. The plot – ships in the night, mistaken identity, and good old-fashioned 18th-century sexism – suggests that all women are unfaithful. The enlightenment-style philosopher Don Alfonso, through the medium of a wager, gets Guglielmo and Ferrando to disguise themselves and woo their ‘faithful’ lovers, sisters Fiordiligi and Dorabella. Hilarity ensues, but also subtle darkness and cynicism.

Enter Improbable. Setting the piece in New York’s Coney Island in the 1950s, Pye’s set enjoys bright colours, carnival themes, giant clown mouths, and fluttering advertisements. When Fiordiligi rises through the air in a comic book-style hot air balloon it is entrancingly beautiful. Driving the action forward we have a troupe of circus trained actors who, when not moving the sets, are breathing fire, spinning along the stage, or dancing spirals in a cyr wheel.

But the recontextualization goes deeper. Placing the stunning music and farcical plot in the transgressive world of circus softens the harder-to-swallow points; when moved to a 50’s context the Clark Kent disguises, and the seemingly predatory activity of the men underline the play’s contradiction and dark cruelty. Jeremy Sam’s English translation also streamlines and modernises the Italian original, making it more palatable to a 21st century audience.

Neal Davies as Alfonso leads this merry jig of deception as a don of the Italian mafia, with a confident baritone and worldly stage presence. His accomplice and runaway star as the classic Mozart-ian female is Soraya Mafi playing Despina, the hilarious, coquettish servant to the two noble ladies. Although ending up tricked just as badly as her employers, she is a far more interesting character. Mafi is all-knowing glances, leaping vocals, and bubbling harmonies. Her comic ability with accent and timing means her own disguises as the doctor and a cowboy priest almost eclipse the gentlemen’s.

But the main dish served is the lovers. Nardus Williams as Fiordiligi and Benson Wilson as Guglielmo were both products of the ENO’s remarkable Harewood Artists programme, a scheme that nurtures and finances young opera singers. Boy, do they know how to pick them. Wilson’s comedic timing and smooth bass and Williams’s serene soprano simply must be championed.

Amitai Pati, making his ENO debut, shines as the overly confidant Ferrando alongside Hanna Hipps as the lovingly inconstant Dorabella. Her transformation from psychotically devoted to pragmatically flexible is one of the jokes that lands best in the new context.

The adoption of a more modern, comedic style slaps a fresh layer of sequins onto the production. Interaction with the circus chorus keeps the comedy constantly bubbling, especially Lilly SnatchDragon as the silent but hilarious judging bystander, with dynamic drag makeup. Her eye-rolls are almost arias in themselves.

The only issue with this otherwise excellent production is that the large and demanding set pieces require a lot of people on stage. Intertwined with the detailed but busy costumes by Laura Hopkins, this means that the stage feels a little cluttered at time.

Plunging the piece down the rabbit hole, into a world of half-truth and falsity, levels the characters immensely. Improbable have done it again, keeping us entertained, and deliciously diverted throughout. A play about deception with a good dose of razzle-dazzle: now that’s something to take your hat off to!