L-E-V: Chapter 3: The Brutal Journey of the Heart 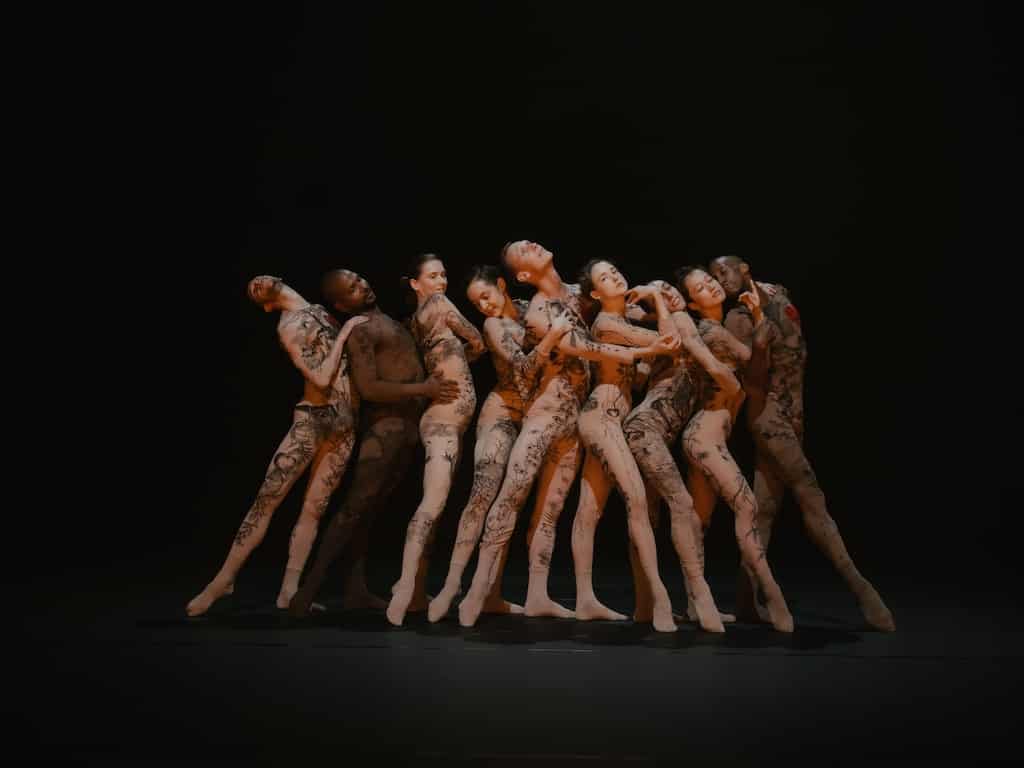 Plato waxed lyrical about it, Edith Warton was cynical about it, and now Israeli dance sensation L-E-V has trotted out their final triptych around everyone’s favourite gooey subject…..Love. Scaling-up in Sadler’s Wells and upgrading once more with famous costume design. The question is, how they will conclude on a topic that’s been done to death?

Well…… well is the answer. I was intrigued to see how Sharon Eyal and Gai Behar’s 9-person exploration concludes itself (sounds dirty doesn’t it?). Already having seen one of the 3 chapters in the car-park-come-dance venue underneath Franks bar in Peckham (Bold Tendencies) I had plenty to compare it to.

In striking tattooed head-to-toe leotards/morph suits designed by the goddess of fashion herself Maria Grazia Chiuri (Dior darling, Dior) the dancers look like a cross between hunched over flamingos and Yakuza gang members. It’s even more fitting as the movements, and mock nudity recalls the mixed bathing Japanese bathhouses (Sentō). Just with added literal bleeding hearts on the dancer’s breast which in my mind is a little on the nose for the creative director of Dior? But what does this lowly theatre kid know?

With Grazia guiding the looks, and long-time musical collaborator Ori Lichtik crafting a jazzy, RnB, afro beats, bouncing, lighter score there’s not much else you need. Set? With Dior? I don’t think so. Alon Cohen develops intimate spaces with restrictive lights, then opens them out again with expansive washes. That’s it, folks… it’s all dance from here…

AND WHAT DANCE. Eyal and Behar have exchanged the previous chapters thumping techno intensity for a more camp, ironic, and self-aware language of movement. Stranded on their tiptoes, the dancers prance, frog-like legs raised repeatedly like pistons of some great engine. Hands like coquettish fans flutter conspiratorially. L-E-V always known for these contorted physicality’s has lifted these painful positions to a level of sexual parading more at home at your local singles bar than lit artistically on the stage. Dancers, still hunched over, like looming graveyard statues buckle around each other. There is much more bumping and grinding in this piece, the nude-coloured bottoms sway and swing with suggestive potential. More club than industrial wasteland as the landscape of the heart is explored.

The piece is funny and that must be their idea of super-sizing it at Sadler’s (alliteration nation). The last show was intimate, with the audience on all sides but only a few rows deep. Faced with the chattering multitudes of the upper-middle class the idea to maximise humour means the dancers fill the stage and don’t feel too swamped by its largeness.

What sticks is this idea of trash-talking birds, a flock of mean-spirited, cynical crows, flamingos, or parrots. Searching for love, but flitting off in that typically avian way. Birds of a feather flocking together, preening, the cacophony of spring mating rituals, and harsh calls. L-E-V as always produces something effortfully stylish, engaging, and in this case amusing. Proving the point very clearly that good things do indeed come in threes I am sad to see the trilogy end, but I am sure they will be pulled across the globe very soon. Now, where can I get one of the bodysuits? Maria? I’m very open to a collab! Maria? Maria??