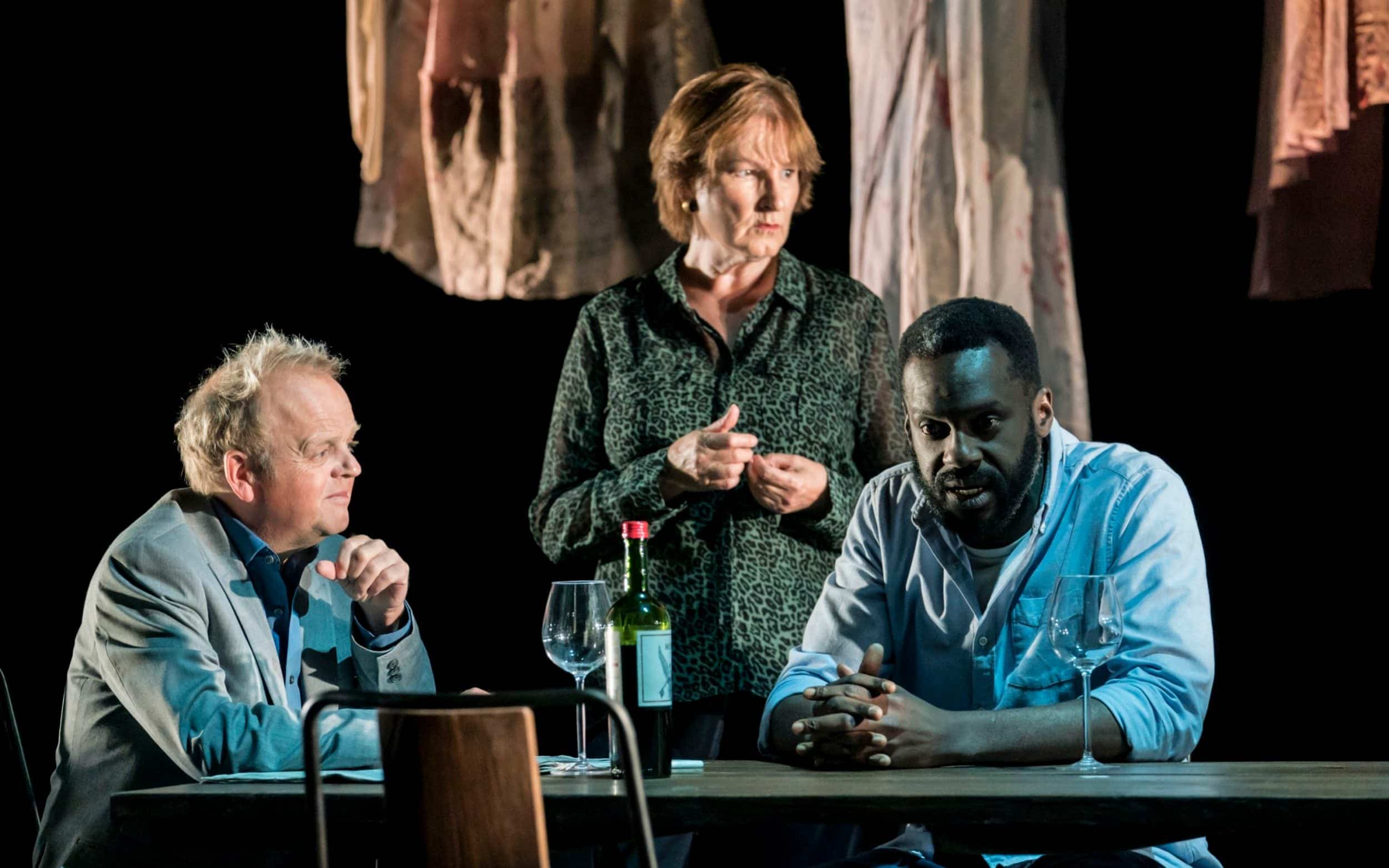 Caryl Churchill’s quartet of plays simmer along, slightly disconnected, only loosely joined by the themes of violence, magic and dark humour (delicious). Unusually, the plays warm up considerably as the premiere progresses.

Starting rather emotionally frozen, Glass is the story of a young girl made entirely of glass, and the comic and tragic reality of her doomed love. Maybe in comparison to the older casts that follow, this younger set of performers never really get into their stride. Despite being suspended ethereally on a wooden plank in the air the piece feels rather flat.

Kill is up next, following the blood-soaked stories of the curse of the house of Atreus. Exposing their comic death-toll and human “relationships” whilst poking fun at the non-existence gods (for who much of the violence is committed) Tom Mothersdale sits and smokes on a cloud, embodying the Greek pantheon. This is more like what we expect from Churchill, postmodern, stark and bitingly written with an emotional full stop that hits you hard.

Bluebeard is really when the evening begins its ascent to the top of Mount Olympus. Following the friends of famous wife-killer Bluebeard after his death, as they discuss his murderous and misogynist tendencies. Deborah Findlay, Toby Jones and Sule Rimi stand out, thawing the cool Churchill writing. Six blood-soaked dresses rise behind them as the friends move from sober disgust to drunken confusion and hilarity. The wonderful statement of “but he played the piano so beautifully” encapsulate the pieces’ ability to question and reintegrate ancient myths within a modern lens. Something that Churchill does so well, showing the lack of change in our fascination with gore and cruelty and sexism.

Lastly, we have Imp. And what a finale, by far the longest playing (taking up the entire second half) it could easily be a standalone piece. Focusing on the personal myths we create out of loneliness or anger it follows Dot (again played by Findlay) and Jimmy (Jones resurfacing) as they cope with old age. Jimmy find solace in running and Shakespeare/Greek stories and Dot holds onto her own terrible secret hidden in a bottle. Louisa Harland provides heart within a piece that explores the difunctional lives of the old and forgotten and the humour within the most seemingly “normal” people.

Findlay and Jones hold the piece together performance-wise, proving once again that experience is worth its salt. Miriam Buether’s set is sharp and refreshing and Jack Knowles lighting allow the sections of the set (the living room of Imp, the floating board of Glass) to be suspended with a uniquely clean quality.

Although there is an overarching theme the lack of consistent quality between the pieces is its shame. Imp by far steals the night while Glass seems like a rather simplistic view of the fragility of youth. Churchill’s writing is pulling at the fabric of society with a satirical smile on its face, but only a few of her jabs succeed in pulling down the whole curtain. Others just scratch the surface. With circus performers between the plays they impress but also confuse the reasoning behind the collection of the pieces, the effect is interesting but not wholly successful.