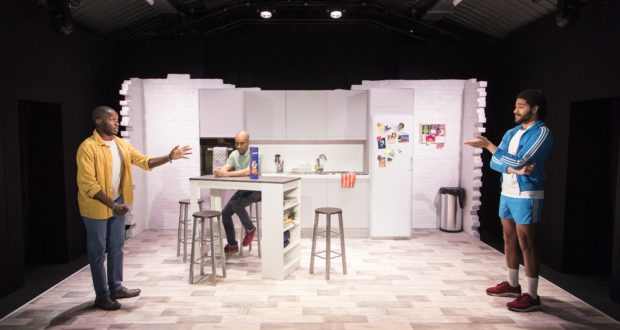 Jake Brunger’s sexual comedy Four Play returns to the London theatre scene. Snappy, sassy and with a cynical undertow, it is interesting to see how this piece has aged since its 2014 debut, considering the breakneck speed at which the theatre world moves.

Focusing on the complications of monogamy within the male gay world, we are introduced to Rafe and Pete, and their sweet, but ultimately disastrous attempt to “try new things”. By ‘new things’ they mean their friend Michael, and by ‘try’ they mean sleep with, separately and behind his boyfriend Andrew’s back. What’s wrong with taking up ballroom dancing I ask? Is it a good idea? Of course it isn’t, but in the ensuing and slightly predictable mess of rivalry, friendship, sex and secrets Brunger’s ability to question what a group deems acceptable behaviour proves engaging theatre.

Carrie-Ann Stein’s set is simple; a naturalistic modern kitchen. Matthew Iliffe’s directing does wonders with the limited space, allowing scenes to bleed into one another with a nice overlapping effect that produces a cohesive through-line.

Performance-wise the medals fall fairly between Marc MacKinnon playing Andrew, the hilarious, hard done by and neglected boyfriend of Michael, and Keeran Blessie who plays Pete. MacKinnon dominates the stage, pushing the comedy and managing to deal with the at times rapid emotional changes; comedy giving way to almost tragedy and soft tenderness. Blessie is utterly believable, natural and at home, an actor with a real ability to seem to not be acting… which conversely is kind of the point isn’t it?

In any play that is trying to be both funny and insightful moments of gravity can be an issue. The plot builds to the inevitable party-bitch-fest scene and, while not in Who’s Afraid of Virginia Wolf territory, the battle is pretty immense. Unfortunately, what follows as one couple (I won’t say which) founders and the other thrives is a little like trudging through an emotional quagmire; still meaningful and touching but a little heavy-handed and gooey.

Although the play depicts the problems of lack of commitment and rule-breaking when it comes to being “monogamish” there is perhaps a slight disconnect for a 2020 audience, as the depiction of polyamory and all its shades is completely negative. Nevertheless, this show is as intelligent as it is entertaining and makes you question your own relationships (past and present) and the rules that you agree on. Just be ready for a rather intense tube ride home with your significant other.