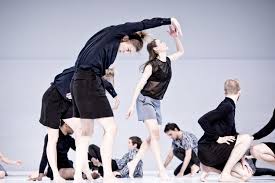 As we pile into the Southbank Centre’s cavernous Royal Festival Hall, we are greeted by 17 dancers limbering up in full house lights. This is clearly going to be an experimental dance piece with a capital E. Figure a Sea is a joint project between the celebrated choreographer Deborah Hay and the Swedish Cullberg Ballet (Sweden’s foremost contemporary dance company) with music by Laurie Anderson. With such glittering names the crowd is drawn, and the expectations are high, but are they met?

Regrettably, no. The whole piece severely lacks a connection to the viewer. The stark set is lit equally unforgivingly from above, and with only one lighting state it’s hard to know what Minna Tiikkainen is trying to say with her colour palette. The costumes are equally uninspiring.

This would all be understandable if the music and choreography provided focus, theme and depth. Unfortunately, that isn’t the case. Anderson, queen of the early electronic movement creates a score than never builds to anything, always keeping a low and rather plain crackle. There is lots of classic thumping and machine-esque clattering, but with no sweeping burst of intensity. It therefore gives very little for the dancers to play off leaving them in uncomfortable silence for a lot of the piece.

Hay’s choreography is a little better as there are some lovely moments of small repetitive infectious movements that ripple through the cast. Yet again this gets shut down before it can fully develop into anything tangible. Although it has the classic postmodern brutality that Hay is known for, it lacks a focus or communicable theme, and feels like exploration for exploration’s sake. I don’t expect the cast to run around in a blue wash pretending to be waves, but some hint at what is trying to be deconstructed would be nice.

The Cullberg ballet is a selection of some wonderful dancers, and some of the shapes created are very pleasing but there is an overall lack of aesthetic awareness that leaves the piece feeling flat. Maybe the stakes are too high for a piece with such established talent involved but the majority of the piece looks more like a movement class rather than a piece of theatre. Despite some sections of humour and beauty overall Figure a Sea gazes inward so much that it excludes the very audience who have come to see it.

Figure a Sea played the Royal Festival Hall until 6 September