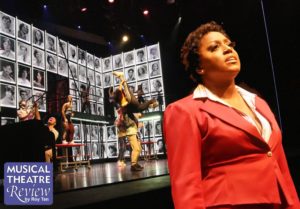 Your name up in lights, leg warmers and dubious racial stereotypes, everything is bundled up into the classic film, TV show, Broadway and Off-Broadway musical. But how has the most recent spawning of the famous musical landed from its soaring leap into the Peacock Theatre?

Following the various dreams, aspirations and heartbreaks of the class of ’84 at the Fame school, based on the real life LaGuardia theatre school (not the airport but the same eponymous mayor) in New York. Promising the classical America dream, riches and immortality (put simply), this musical has crafted and informed our idea of the performing arts, trying to delve into both its great highs and shocking lows.

It is also undeniably a child of its time. Many things within the piece have aged very badly, but can that be blamed on the current production? I think not, the musical is hugely popular and a time capsule of the 80s with all its contradictions.

But enough theoretical, how does this piece pirouette, sauté and pas de chat into our hearts? Mainly through the choreography, being the high point of a rather messy reincarnation.

Nick Winston (director/choreographer), although not gathering much praise for his rather perplexing direction, can be thanked warmly for his bright and snappy choreography that keeps the piece going. Making you look forward to each (very regular) dance number. Set wise the piece is cleverly placed with a luminous wall of 80s class photos, large metal fire escapes creating levels, and the classic New York setting. Morgan Large’s vision is clear and simple.

Performance-wise is where things start to get a little problematic. With a star-studded cast of both musical theatre regulars and TV actors, it was always going to be a mixed bunch.

Impressive vocal performances come from Mica Paris as Miss Sherman, giving us a gospel solo that blows the audience away. The other actor who really stands out both musically and character-wise is Stephanie Rojas, playing the “survivor” Carmen. Her fall from grace is a heart-wrenching moment in a piece rather disconnected from emotion.

Confident vocal performances are provided by Simon Anthony playing the awkward Schlomo and Molly McGuire as Serna. The overall problem is that only Rojas and Anthony are exempt from the tendency to be melodramatic

Despite an effective set, wonderful energy dance-wise and live music, Fame comes across as slightly shallow. It sells as an outmoded idea of the pursuit of fame, and although it tries to show us the price that must be paid for such a life (via the character of Carmen), the blame is laid entirely on her for the life choices she makes.

In a climate all too aware of the rotten side of showbusiness I am not sure where this musical sits. Or maybe I am overthinking it, and we should just flatten our perm, pull up our leotard and spin-off into the stage lights?!