Age is still a contentious subject, both in the Dance world and outside the circle of Sadler’s Wells walls. Inside the venue and others like it, the bodies of the young, fit, and predominantly (at least for most of its history) white humans have been the ones presented to us. 2014 brought a celebration of something different, the Elixir Festival, and for 8 years they have been doing just that. Something different.

Elixir Extracts is an offshoot of the main festival, and so into the Lilian Baylis studio on a hot Saturday afternoon we delve. The diversity of age on stage is interestingly reflected in the audience as young families and children (suppresses shudder) populate the mid-afternoon ranks.

Trying not to be the childless, judgmental critic we all know I am I grin and bear this edition. Through eruptions of baby cries, and the assault I received from the goblin behind me with a fluffy toy, on I soldiered.

But doesn’t that fit into the festival’s whole point? Must we not question who is showcased in these hallowed spaces of art? 60 is the new 20? Etc etc…

The afternoon is short in length, soft, and slow in its pacing. Less kicking things off and more launching our boat gently into the waves of dance we have ThreeScoreDance’s piece Alone Together. Harry Escott’s unfolding string-heavy composition underscores a work that is forcible in its sense of nostalgia and loss.

The dancers are dressed in silk slip dresses and Charlie Chaplin white shirts and braces. “It’s all about you” is shouted into the space by a male dancer as the cellos and clock’s ticking hammer out the minutes passing. Visually interesting the best moments are when the dancers join into a Greek phalanx. Stamping and advancing with accusative eyes. Jason Keenan-Smith’s choreography burns in a tableau strip of light, and flashing images like silhouettes frozen in a strobe. The faces: snapshots of lives lived, and love lost ground the work very effectively.

Company of Elders concludes the day’s work. Firstly, with Relive, a film created in lockdown over zoom with Sadler’s Wells’ own company (Company of Elders) and the choreographer Eleesha Drennan.

The screen is revealed, and we watch a piece interesting in its formatting although a little on the nose when it comes to its choreography. Dan Martin’s video editing (and Amy Wildgoose’s zoom management) is dexterous. Switching from the grid pattern of all the dancers, then slicing them up with close-ups, unafraid of dark borders and sections of visual silence.

The dance however is a too obvious exploration of lockdown life, one that has been rather dredged to death. Hands are wrung and rewashed and a vague swinging of arms in circular “meaningful arches” prove aimless. This is underlined more in the live version of the piece that follows.

Bright costumes and a shifting line of empty shoes around the space are pleasing. Yet the dance descends into messy group movements and waltz-heavy par de Deux. The theme of connection and physical contact brings nothing new to the table. As a crescendo, it rather falters in comparison to what preceded it.

Slap bang in the middle however is the German non-professional company Dance Lab. Like most reviewers the word nonprofessional normally gets me clutching for my belongings before the first blackout. But in many cases that is unfounded and unfair. This is one.

Since 2016 artistic director Laura Böttinger has met with this group of “friends in their best ages” in Berlin. What they have created at first seems a little simplistic but has a charm, naivety, and beguiling informality to it that pulls you in.

The company in autumnal shades (I won’t go for the joke no matter how tempting it is) start in lines, walking up and down the space. Pockets of simple movements erupt on different planes from the horizontal marching. We get breakout sections with some light but stunted contact improvisation, yet gifting an overall immediateness to the piece. A memorable group section with right-angle hands, morphing from dance-like-an-Egyptian to blowing kisses and stretching out like the sphinx.

But it’s the cat walking up and down, billowing costumes like falling leaves, smiles of enjoyment barely concealed between red lips. It feels like an evening of friends doing what they love, dancing, and revelling in that connection.

Overall, we need to change who is showcased when it comes to race, gender, or age. Surely what we want is passionate people sharing that love and experience both lived and corporal. If it takes a potential head injury from a Peppa pig toy for me to witness and champion this then so be it, I will suffer for the cause! 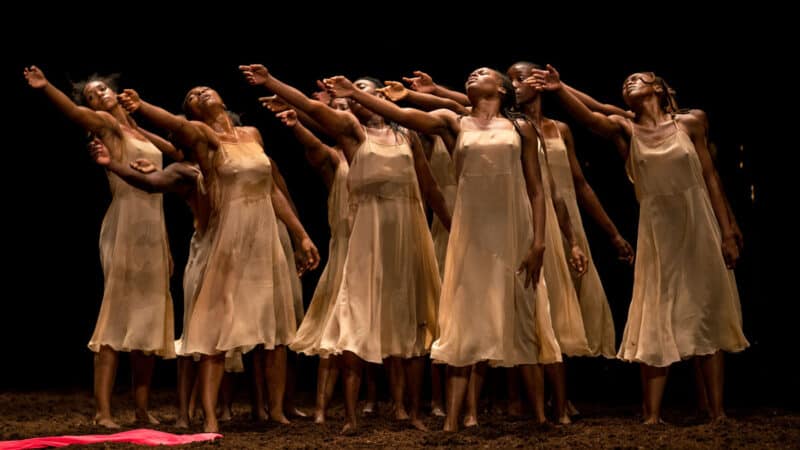 Pina Bausch: The Rite of Spring

Sadler’s Wells A shining example of the potential of our international-interconnected world, and a warning of the issues that plague