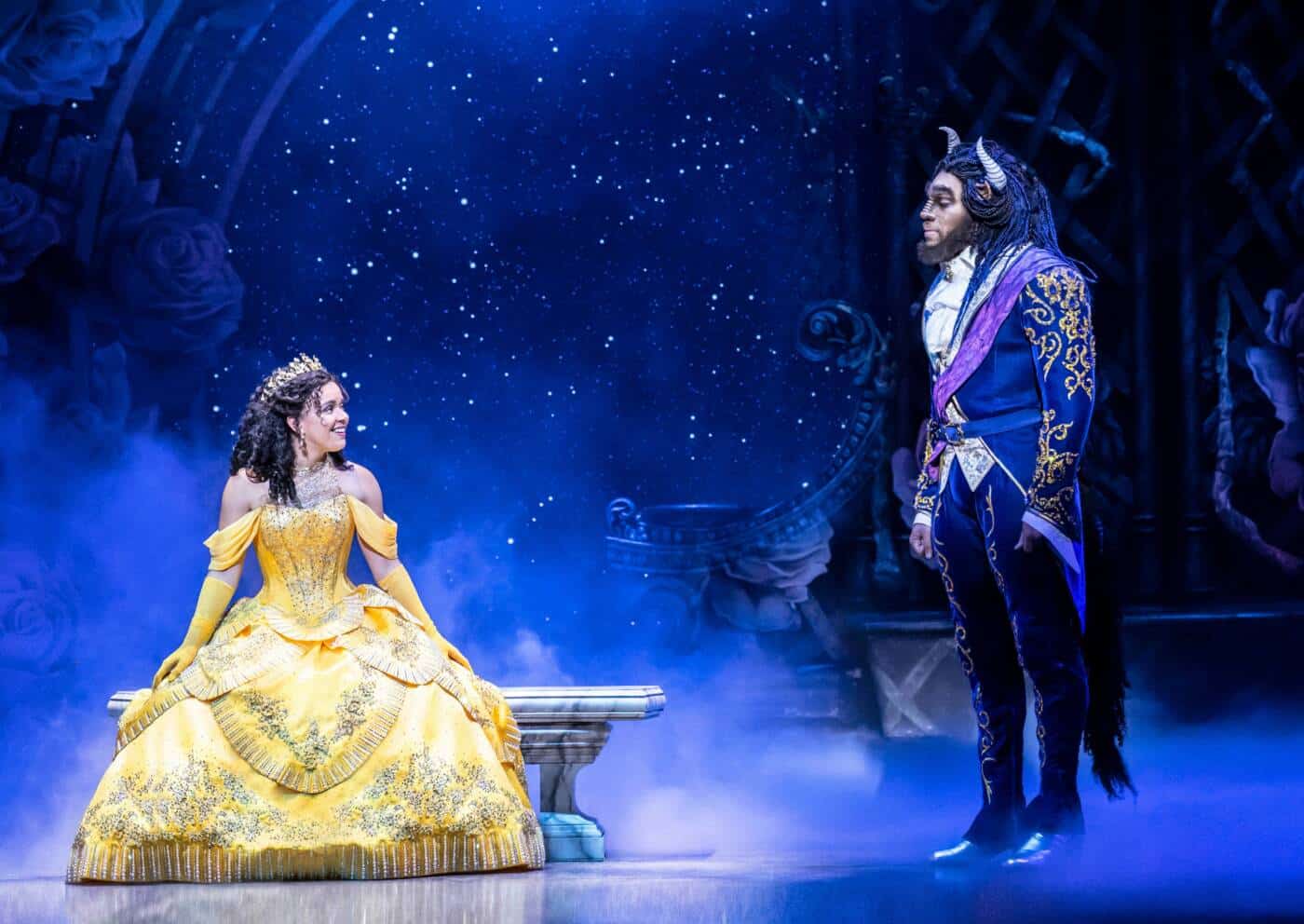 A high-intensity, full-on production that might please the kids but is definitely starting to feel dated.

The acclaimed, genre-redefining 1991 animated film of Beauty and the Beast, crafted by musical greats Alan Menken, Howard Ashman and Tim Rice, subsequently spawned a less-than-positively received 1994 stage adaption. 2017 saw a middling live-action film remake. Now this current revival of the tale as old as time takes to the London stage, but sadly feels anchored somewhere within this uneven history.

Before I dive in mental scalpel flying, there is a caveat. Like many of Disney’s theatrical productions, this is family-friendly with capital ‘FF’. Kids will love the bright colours and easy curves of the simplistic story. But these days Disney films (and therefore musicals) are usually expected to appeal to those of us able to vote as well.

The line between panto and professional musical is often a tough one to draw, although it’s normally marked by a variety of factors: intensity of performance, build-quality of sets, simplification of themes, etc. I think you can see where I’m going…. Most of the performances in this production are at a constant 150% with very little variation, so it’s all rather overwhelming. Courtney Stapleton as Belle, although a confident singer, overdoes the role somewhat, and the show’s desperate attempt to breathe modernity into the ‘not-like-other-girls’ book-smart (but still pretty) heroine doesn’t really land. Meanwhile, Tom Senior as Gaston and Louis Stockil as Le Fou are moments away from shouting “it’s behind you”. Shaq Taylor as Beast, however, manages to bring humanity to our fluffy hairball with some success.

A shining light is the furniture servants, which as comic relief are rather expected to be larger than life, so fit the bill. Gavin Lee is a joy to watch as everyone’s favourite sassy candelabra Lumière. Flicking real fire from his wicks, he is aflame with comedy and charm. Sam Bailey as Mrs Potts follows calmly in the footsteps of the film’s Angela Lansbury, although is unfairly eclipsed by Lansbury’s recorded narration at the start. Nigel Richards as Cogsworth is appropriately frantic and fussy and both he and Samantha Bingley as Madame keep their scenes ticking along nicely.

Ann Hould-Ward’s costumes are luxurious, complementing the twinkling crystal of the Palladium’s interior splendidly, but (certain exceptions aside) Stanley A Meyer’s sets, although detailed and expensive, feel flat. They roll on and off stage in clumsy scene changes, and the descent of a gauze for projection without any attempt at misdirection is sadly unsophisticated.

I mention some exceptions and these are the three giant rococo-style scrolls. Massive and encrusted with electric candles, they swing in to create many castle scenes. These are surprising stars of the show, like giant pendulums arriving with breath-snatching swiftness. Both they and Lee’s Lumière deserve their roses.

The classic film tunes ‘Be our Guest’, ‘Gaston’, and ‘Tale as Old as Time’ are energetic and complexly fleshed out, but trade on the allusive commodity of memory. The big dance numbers by Matt West are flashy, building to frantic intensity, but beg the question “to what end?”

West, who is also the director (supported by Kella Panay and Sam Scalamoni in the UK) has stuck with this production for 30 years: a testament to his belief in the tale’s transformative power. I would argue the show’s theme, along with the practical reality on stage, is woefully outdated. The book-smart beauty is a trope done to death, and imprisoning of innocent young girls has fallen out of favour quite heavily. Even the live-action film’s clumsy addition of a gay Le Fou is passed over by this production. Maybe for this story, like many Disney tales, it’s finally time to turn off the money printing machine?

Don’tBeaium miss out on the next big experience at the London Palladium! Click here!