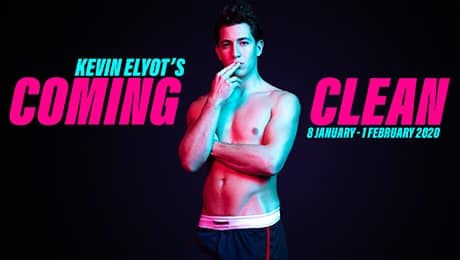 “Have an éclair dear, calm yourself down,” and boy do we need calming down! With a wit, pace and intensity that almost sweeps us off our feet, the audience at the Trafalgar Studios is treated to Kevin Elyot’s first play Coming Clean. It is poignant, raunchy and heartbreaking with a heavy dose of totally justified nudity, what more could you ask for?

Thematically, it is interesting and the cast serve us charisma, uniqueness, nerve and talent! The play is drenched in a heavy spray of witty one-liners and infectious joy, provided mainly by the hilariously outrageous Elliot Hadley who plays the sassy best friend William impeccably. The emotional clout is brought by half of the main couple Lee Knight playing Tony, whose heartbreaking battle with his dying relationship and the concept of fidelity pulls at everyone’s heartstrings. Adam Spreadbury-Maher’s direction is snappy and fresh and the overall production is slick and as fast as Elyot’s writing demands.

The concepts put forward, although a little shallow, still resonates with the current world. The constraints of monogamy and the complexity that polyamory can bring, are arguably more mainstream now than in the 80s. The rules we set within relationships and then break still manage to cause an uncountable amount of pain. Rocketing between tears and squeals of laughter, this is as shocking as it must have been when it was written 35 years ago. I also maintain that it is so important to have a show comprised completely of gay characters, not as a token, sassy BFF or as an add-on who dies 25 seconds into the piece (I am looking at you Doctor Who). No, this is a play for gays, with gays, exploring the complexities of gay relationships, whilst making points about human interaction.

However, there are a few minor pieces missing from the puzzle. Having been first performed almost ten years prior to Elyot’s most famous play, My Night With Reg, this does seem like the slightly lacklustre older brother. Touching on the same issues of dynamics within a gay friendship group, and with many recurring elements, the similarities between the two do not play into Coming Clean’s favour. Perhaps, partly because of the time it is set (just at the beginning of the AIDs crisis), it is more optimistic, yet this also means that it is not as hard-hitting. However, this is nothing to do with the undeniable proficiency of the production.

Coming clean is clever, pithy and important in a day and age where we are still battling some of the same ignorance as to when the show premiered. Although we have come a long way, this show still stands as a relevant and reactionary example of the perennial problems of the human heart.