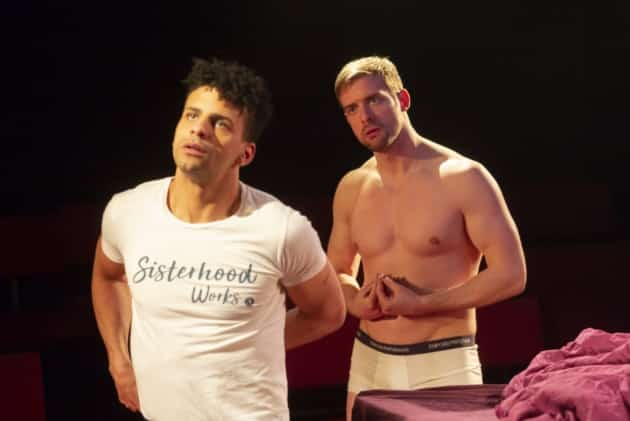 So much of our lives and even more of our relationships are spent in bed, not just having sex but everything else. Undetectable follows the relationship of Bradley and Lex as they battle their pasts, presents and futures.

In this world premiere at the King Head, the depiction and attitude towards nudity is refreshingly brave.

In a relationship between two men where so much hinges on sex, nudity is natural, what unfortunately is not so natural, is Tom Wright’s dialogue.

At times beautiful (if over symbolic) “the envy of a generation of ghosts,” the play’s multilayered points are lost in a sea of perplexing words which are out of place in the intimate setting.

We are welcomed into these men’s bed quite literally as the set is just a raised bed.

The point made by the audience sitting judgement around their emotional troubles is clever but limiting for the scenes that are not bed-based. The flashbacks are confusingly signposted, crucial moments are lost in disoriented confusion.

Any two-hander is exposing for the actors, but the show is unevenly pitched. Freddie Hogan as the more classical masculine muscle Mary Lex gives us a complex and nuanced deconstruction of the stereotypes of his build.

But despite having more to chew on, Lewis Brown’s stab at the witty, argumentative and deeply damaged Bradley falls flat in comparison.

For a character who should really skip with paradox and change of pace, he comes off as shallow and predictable.

While Undetectable is an admirable and brave approach to the difficult topics of HIV, societal pressure on minority communities and LGBTQ+ culture, for all the see-through boxers, sex positivity and thumping music, it’s a cool glass of water that doesn’t quite satisfy.