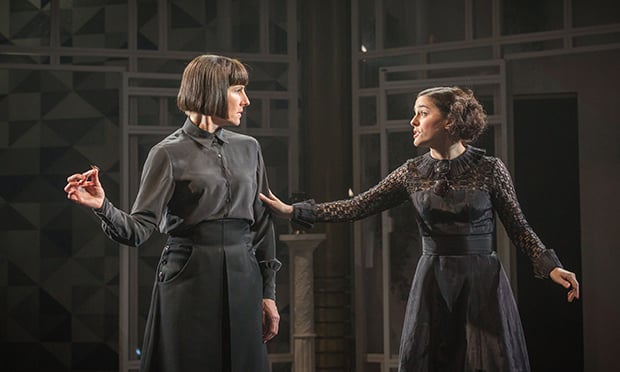 ‘Dancing with humour, energy and life’

William Shakespeare’s was born in April, and it is also the month in which he died, so it seems fitting that our Thursday night theatre-fest looks at a modern version of Twelfth Night.

Beaming bawdy revelry into our living rooms, with just an edge of cruelty – this is the bard at his funniest!

The play focuses on the trials and tribulations of shipwrecked siblings Sebastian (played by Daniel Ezra) and Viola (Tamara Lawrance) in the kingdom of Illyria.

It brings a confusing mix of cross-dressing, misdirection, trickery, malice, drunkenness, love, and a heavy sprinkling of wit. Pay close attention, as the piece shifts as quickly as desert sands.

Speaking of deserts, the set itself resembles a halved pyramid that swings around like a very slow (and expensive) game of jump rope.

A neon drag bar (complete with queen) is spun and unfolded into a manor house garden with a simple flipping of a page – the whole process resembles a pop-up book. Enchanting!

Tamsin Greig as a gender-bent Malvolia is at first a little stiff, but like trying to eat cold oats you must allow her to warm up, and warm up she certainly does.

Mixing the character’s classic arrogance with a hilarious singing number (involving spinning nipple accessories), her interaction with the audience and outlandish mannerisms are a winner.

Phoebe Fox as Olivia brings a strength and admirable willpower to the role, and Lawrance’s Viola is infinitely watchable.

Doon Mackichan as the fool Feste pulls the action along, and Oliver Chris’s subtle battle with his sexuality as the duke Orsino is another nice detail.

Swept along by some lovely flute, clarinet and saxophone accompaniment by Hannah Lawrence – music really is the food of love – the whole piece has an almost Wes Anderson feel, with block colours and Gilmour’s eclectic costumes.

We all know that Shakespeare is not known for pace and can drag when not approached imaginatively. This piece glides along, dancing with humour, energy, and life.

We have a gay love affair between Sebastian and his servant, same-sex overtones between Viola (pretending to be a manservant) and Orsino, and even more between Viola and Olivia. The cherry on top is Malvolia being tricked into loving her mistress Olivia. It’s a very queer affair, thankfully!

Not only is this not a contraction of Shakespeare’s script (more a gentle tug at the themes in my mind) but the uniform equality of sexualised action and manner between the men and women is important.

This comedy is filled with quick changes of affection, gender, and manner, and the production underlines why Shakespeare’s work has lasted so long.

It is why the bard’s plays (with some subtle tinkering) can delight audiences across time and geography.

Interestingly for a comedy, the ill treatment of Malvolia is not swept under the carpet in the glorious conclusion, and with a tearful ‘I’ll be revenged on all of you’, Greig is the final image, walking up a flight of stairs into the falling rain, a broken woman and a deft reminder that in “jest” there is always a victim.