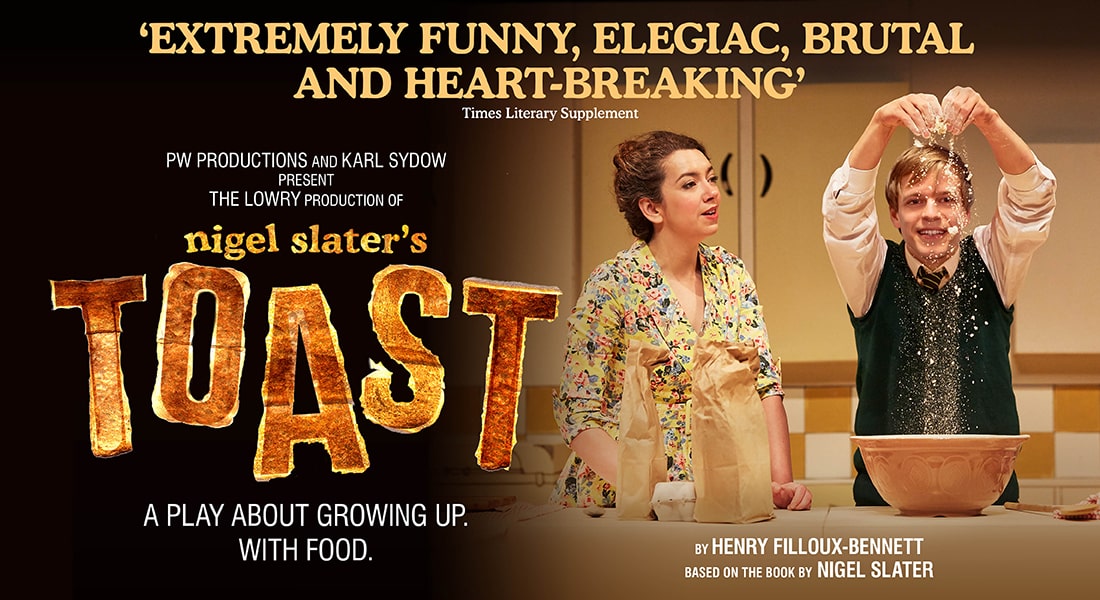 Welcomed in by the comforting smell of toast, I enter The Other Palace which plays host to the latest incarnation of the food writer Nigel Slater’s autobiography. But how does it match up to the film? Does it step up to the plate (sorry)?

With a hip-swaying 60s soundtrack, Toast charts the kindling passion of a young boy who loves to cook. Set in the middle-class suburbs of Wolverhampton, the journey to Slater’s current culinary stardom is littered with memories, struggles with his sexuality, and sadness. Although the production gets off to a slow start the show really warms up nicely. Libby Watson’s set, on the other hand, remains cold throughout. With a rather literal take on a show based almost entirely in a kitchen we get… a rather flat kitchen. Although moving cupboards are used to create some variety this patterned paradise holds a lot of the action back and restricts sections that could really shine.

However, what really sets this apart from the 2011 film is the immersive element brought by the provision of food for the audience. The story is heart-warming, both extraordinary and everyday. But when staging a story in its third retelling it’s important to bring something new to the table (again sorry) for its London premiere. With old fashioned sweets, walnut whips and lemon tarts we, the audience, are bribed into loving the piece (apparently food truly is the best way to a person’s heart). The production really brings home the memory-inducing power of food and our reliance on it. This speaks volumes about theatre’s ability to transcend and connect on a deeper level than literature or film (biased? me? Never!) The hope and heartbreak within the piece is brought into our own bodies through these delicacies, and the story is made real, if maybe a tad too sweet.

In addition to feeding the audience, the story is playfully deconstructed for the theatre-going public. Giles Cooper’s Nigel is perfection, not overdoing the child acting and progressing to an awkward 17-year-old seamlessly. He leads the production and his enjoyable monologues to the audience that the other characters are aware of produce a light and comic feel to the show (who doesn’t love a broken fourth wall?). Large sections of unnaturalism and some awkward dance sequences soften the original tale. Henry Filloux-Bennett manages to capture the film and book’s poignancy and breathe a little theatre magic and warmth into it which is to be commended. The rest of the cast’s flexibility with the many roles and transitions is equally impressive. Lizzie Muncey’s Mother is divine, rightly foregrounded in this version, providing more complexity. We fall for her instantly. Focusing on the earlier part of the story means that Marie Lawrence’s hilarious Joan doesn’t come under too much comparison to Helena Bonham Carter’s depiction in the film.

This is a bittersweet story of how food shapes the people we are. With lovely moments of stillness, and some clever theatrical effects the story is reborn. Our taste buds are as invested as our hearts are as we watch a magical moment of Cooper cooking a real meal on stage at a moment of crisis. This simplicity is the pinnacle of charm for this piece. As a nine-year-old Slater states: “it’s almost impossible not to love someone who cooks you toast”. As the burnt smells of home waft through the theatre and I finish my second sherbet lemon I am inclined to agree with him.

Toast is playing The Other Palace until 3 August.