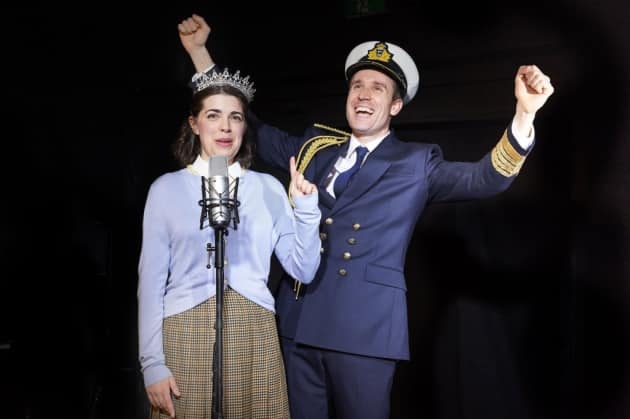 A riotous romp with royals in this electric parody of Netflix series The Crown somehow manages to surpass the original.

Irreverent, hilarious and childishly slapstick, the show provokes a grin that will make your mouth ache.

We’re introduced to down at heel actress Beth Buckingham (Rosie Holt) and her manager/windows salesman Stanley Diamond (Brendan Murphy) as they try unsuccessfully to wow industry professionals with their two-handed production of The Crown.

Following the life of Elizabeth II, with plummy accents aplenty and tonnes of tussles for royal power, their fabulous chemistry proves a sturdy basis from some very British humour.

Details are the charm in comedy, and creating the crown jewels out of a garden light and a bottle of Chambord or viewing a sex scene through the eyes of a corgi, ramps up the laughs.

Murphy provides the heavy lifting, his multi-role versatility and split-second timing is only matched by his rather splendid ability to have the audience eating out of the palm of his hand.

Many of us run to the hills at even the whiff of audience participation, but here the confident use of the poor punters in the front row offered a welcome change of rhythm.

Plain and simply a jolly good laugh for royalist and parliamentarian alike, it’s a match made in theatre heaven – even if you haven’t got a Netflix account or missed the original.

Poking fun at the British establishment isn’t new, but the contemporary references, razor-sharp quips and aristocratic blunders are a joy from start to finish. Owen Lewis directs in snappy style and Robbie Butler supplies clever lighting in a ludicrously enjoyable play.