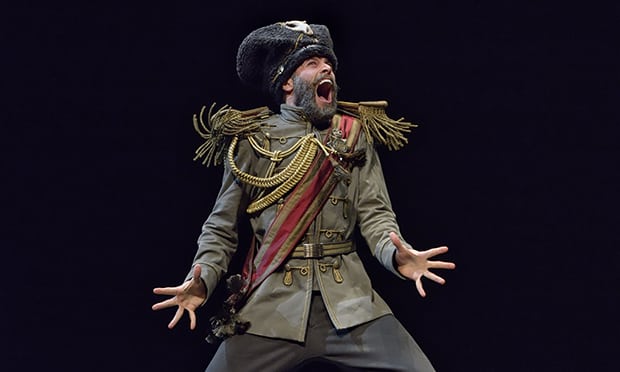 Humour is not an alien concept in the world of dance. Pina Bausch can tickle, Matthew Bourne can produce a chuckle or two, and even Martha Graham occasionally amuses (though not always intentionally).

But the silly, self-deprecating, full-body rumble laugh at a Monty Python film? Or a Vine of a cat sneezing? You’d be hard pushed to find that on stage – until now. Hold my beer, says Revisor.

Choreographer Crystal Pite and playwright and director Jonathan Young continue their stratospheric rise after their critically acclaimed show Betroffenheit in 2016.

This is a partnership made in heaven, as the mix of classical directing and acting knowhow with dance expertise is utterly idiosyncratic.

With its UK premiere, Revisor, based on Nikolai Gogol’s play The Inspector General, gives this satirical farce new life (and limbs).

It is so freshly minted you can almost smell the metal.

Five voice actors underscore the physical action on stage with vocal dexterity and naturism (at first).

Like a radio play, the inhuman volume of the voices create the landscape for the performers to traverse.

In lavish costumes (thanks to Nancy Bryant), the Russian imperial setting is laid out.

However, what happens on stage is far from easy to describe.

Crystal Pite’s choreography is perceptive and surprisingly characterful. Each dancer becomes the voice they are dancing to, giving us a sense of consistency.

This is far from your local lip-sync performance in the Admiral Duncan. This is a physical and artistic embodiment that is utterly spellbinding to behold.

Did I mention the humour? The piece follows a series of corrupt officials as they mistake the identity of an inspector with someone quite different (no spoilers).

Hilarity ensues, yet simultaneously the play exposes the dark side of imperial bureaucracy and human nature.

Giant stags and terrible spectres appear from doorways, drowning us in a strange world of symbolism and reminding us not to get too comfortable with the comedy.

Coupled with Tom Visser’s lighting – is it projection onto a gauze from behind the stage? Or torches shone through crumpled material? – the piece is visually stunning.

The patterns of light dance across the luminous back wall, giving an abstract effect that undercuts the period setting.

The narrative, in all its glorious surrealism, bleeds out as it is repeated a second time.

Without the lavish costumes and with a more dance-heavy focus, it’s like a record being played again but at double the speed, or under water.

The voiceover blurs and the themes of the show are explored corporally, with much skill from the dancers. Meaning bends as the story is swept out from under our feet.

Although fascinating, this section does last a little longer than needed, as the lack of structure is slightly tiring after the linear beginning.

The dancers and creative team of Kidd Pivot highlight the play’s dark undercurrent of cruelty and incompetence using humour.

One minute you’re laughing along at the funny, clown-like, straw people frolicking about the stage, and the next everything takes on a threatening nightmarish hue.

Pite and Young are a force for the future, and with the immensely talented Kidd Pivot dancers on board, the world is ripe for the picking.

Considering the company’s promise of carbon-neutral touring since 2015, what’s in store is progressive, thoughtful and utterly their own.

Also, a story about political and bureaucratic ineptitude in 2020? Bring it on!