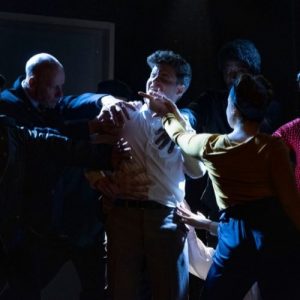 Punchy! The Musical comes out swinging. A little like David facing off against Goliath, this ambitious production aims straight at the eyes. Sadly, that’s where the similarity ends, leaving the piece swinging wildly in circles.

The premise is an interesting one. It’s based on a true story of mental health struggles and working-class life in 1950s London. George (Punchy) Armstrong (Robert Hook) is under the microscope as he struggles with life, love, and the law. Add a Freudian twist, Punchy’s Ego (Jaymes Sygrove) and his Soul (Peter Parker Mensah) physically interact on stage to guide our hero’s actions. Sygrove and Parker Mensah have a dynamic… dynamic, the sinister Ego dressed like Moriarty, and the groovy, loving Soul bounce off one another. Their conflict and eventual consortium is a battle worth watching.

Kevin McMahon’s book, Jack Terroni’s writing/lyrics/music and Tiffany King’s directing is where a lot of the problems begin to bubble from. Not to mention the well-known monster, over-ambition.

The Courtyard Theatre is a medium-sized black box, it is a wonderful space for a certain kind of play. A full-scale musical, with multiple settings, characters and requirements will struggle in such a space. Yet without a strong script, we are building on sand, aren’t we?

The interesting premise is reduced to over-sentimental nonsenses, beating the audience to death with an over-arching theme of loving yourself. Like coffee table psychology brought to life, the writing lacks nuance and subtlety. The characters are two-dimensional and the directorial choices flabbergasting. Why do characters burst into badly choreographed dance sections? Why do some actors use the moveable door to come into the pub setting and some magically walk through walls? Why is there a metaphorical gaping chasm in the middle of the stage which the actors seem to avoid? Why do the songs fail to stick in our heads a moment after finishing? All unanswered questions that Punchy! leaves wide open.

The programme boldly states that there will be no “jazz hands or glitter here” but then proceeds to have large-scale dance numbers and a slushy love montage that lasts for five minutes. The creatives involved seem to be wanting to avoid a lot of the rules of musical theatre but keep the sections that make sense for them. Hiding the live band away in a corner is a confusing choice, meaning the music feels background to the action not integral to it.

Lucy Penrose as the love interest Edie has the best voice and works hard with the script, throwing herself into the dance numbers with admirable energy. Hook as the lead has a less impressive vocal ability, but it’s not tested much. His performance is a little stripped back, but again this could be blamed on the script. Philip Gill playing multiple characters is by far the best actor and creates a couple of the only genuine moments in the piece.

Punchy! can’t seem to work out where it sits. Is it a Once-like play with music? Or a Blue Brothers true musical? The subject matter and psychological angle are intriguing but without a better script, we are left without much connection. Especially to our ‘hero’ Punchy who comes across as spoilt, unlikeable and flat. A stylish visual sense and the gutsy vocal ability of some of the performances help this show along, but without integral changes, the piece feels less like a sock to the jaw and more a wet slap.