Once Upon A Time In Nazi Occupied Tunisia 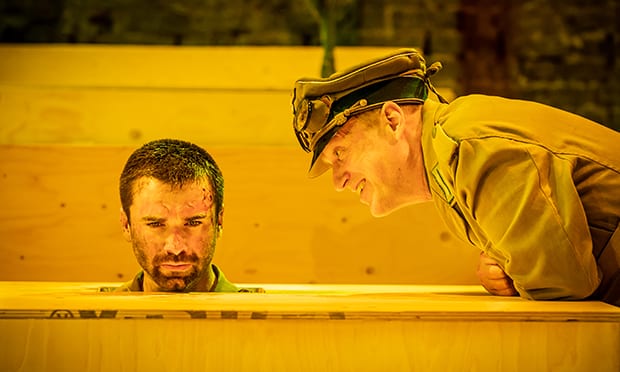 Press night is swinging, the prosecco fizzing, the outfits tastefully expensive, but a trap is cleverly being laid.

Tempted in with a promise of a dark comedy, we are not ready for the conflicting, complex depths of Once Upon A Time In Nazi Occupied Tunisia, Josh Azouz’s outstanding play.

The title rather covers the setting. Max Johns’ set is simplistic, brought alive by clever details and Jess Bernberg’s innovative lighting. Blocks of chipboard hit with the right orange and yellow hues to conjure up the sunbaked streets of Tunis in an instant.

Scene changes seem more like the unfolding of origami, as pools are revealed, domestic scenes unpacked from boxes, and rain falls. The set is peppered with lonely cacti and orange trees standing out in the sea of sandstone.

Eleanor Rhode’s directing is economical yet elegant. I’m discussing the physical first, as it’s easiest. The dialogue, acting, and script are equally slick but infected with that ever confusing trickster, irony. Let’s have a stab, shall we?

Azouz’s writing is politically confident, utterly astounding, cruel, unforgiving, and magnificent. The play follows the lives of a Jewish couple and an Arab couple navigating the Nazi invasion, and the core battle is the baffling struggle for identity.

Some may be insulted by the injection of humour into this period of history, but it is easy to call something evil – more effective to ridicule it. This play does this in spades, poking fun at the monstrous contradictions of fascism, dealing out dramatic irony all round.

Azouz picks, plucks, pummels, and preens, crafting a circus jig of nightmarish proportions. Deftly jumping between Dario Fo-esque surrealist political comedy and brutal naturalistic realism, the pace and tone is gruelling. But the tears and chuckles pulled out of the audience are worth their weight in gold.

In tandem, the accomplished cast rolls like an alligator with the subject matter, digging their thespian teeth in and never letting go. Adrian Edmondson as the maniacal yet hilarious Nazi general Grandma encapsulates the play’s duality. Waffling on, he amuses the audience with tidbits and one-liners, but as a confessed murderer and vocal antisemite. Edmondson humanises this monster, always pushing the comedic line to its breaking limit but never any further in a staggering example of comic timing.

Yasmin Paige as Loys similarly treads the line of biting comedy and realistic humanity with panache. A highlight of the show is a fraught dinner between herself and Grandma, both hilarious yet viscous with tense danger. Pierro Niel-Mee as her husband Victor gives a spirited performance. Playing their best friends, Ethan Kai and Laura Hanna provide the believability of the characters but struggle with the humorous side of the script, sometimes losing comic moments in the quest for characterisation.

Despite these positives, the play’s ending is rather abrupt and feels a little rushed. Nevertheless, the piece burns with a political astuteness that’s rare to find in modern theatre. Azouz doesn’t shy away from topics both painfully relevant and controversial to the world we live in, and thank goodness. Ranking him with writers such as Bertolt Brecht and Sarah Kane, the combined expertise throughout this production is whipped into a frenzy, a perfect storm.

Synergising the opposites, politics and humour, death and love, laughter and tears, and shooting holes in our concepts of self, identity, and loyalty in the process.

This play really pulls the rug from under you, but how else would you get to see the floor?