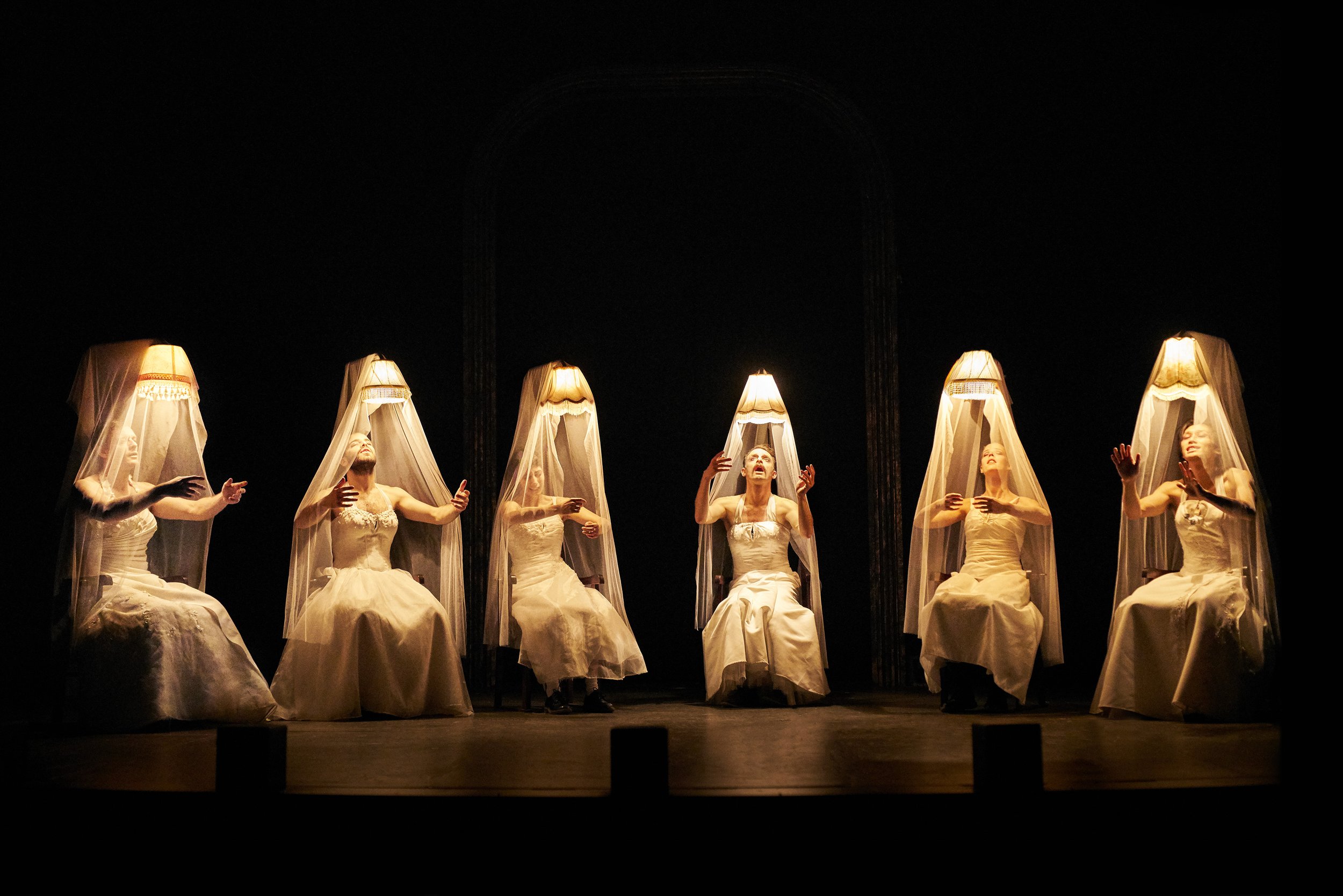 The best thing to come out of Ipswich since Ralph Fiennes (I didn’t know either) Gecko’s surrealist romp The Wedding races around the Barbican. Despite some gifted theatrical magic, I had no idea what was going on….but interestingly I don’t count that as a negative.

Amit Lahav (the show’s creator) describes it as “the complex idea of belonging, state, exclusion and a longing for community, all set within the excitement and ceremony of marriage!”. There are certainly a lot of wedding dresses. The use of Basque, Serbian, Cantonese, Norwegian, English, French, Spanish, Arabic, Georgian, German, Welsh, Russian, and Esperanto, along with intentional mumbling keeps the overall message loose and ephemeral. What can’t be denied is the ensemble’s beautiful group physicalisation and the exceptional eye of designer Rhys Jarman.

The performers create microcosms, diving on and off a semi-circular raised stage with great alacrity. The set is a series of outlandish Dalí-Esq sculptures. A green slide deposit the “babies” into a mound of teddy bears at the beginning of their journey. A glowing arch’s curtains are pulled apart to reveal an impossibly tall table with entities in morph suits drinking tea. Chairs with lamps hanging overhead are lifted on stage giving otherworldly intimate moments for those sat down. Whole families of characters explode out of suitcases and pick sunflowers from downstage. It’s odd, in the very best way.

Crafted in 2019 with their long-time partners the London International Mime Festival the spectre of clown is ever-present. Now, normally I avoid clowns as I avoid…..Ipswich, but I shall retract both statements before I get cancelled by the Suffolk tourism board and the festival. I have never been to Ipswich, and in this case, I am unfair to avoid both as Gecko challenges my prejudices with one zinging stone. The universality of physical-based storytelling: slapstick, crude, yet enlightening carries us along on a wave of impish comedy and ludicrous intensity.

Dave Price’s original shifting score, mixing Klezmer with snippets of recorded opera is grounded by the live band and Temesgen Zeleke haunting vocals. They give the needed thump and bump of living music to energize the many group dances. Moments that stand out are five performers marching on stage in wedding dresses with lights protruding from their chests. Another divine sequence is where a handkerchief is used as a parachute, wrapping and unwrapping a performer like a plastic bag floating in the wind with a score to settle.

There are connecting scenes that vary in energy and effectiveness. A lovely surreal dance sequence involving props (phones, ties, bottles) on sticks flying around a performer is interesting once, giving echoes of Rene Magritte’s paintings. The second and third time? It wears thin. Further bureaucratic cycles become reparative (maybe purposefully) and overall about 20 minutes could be trimmed to allow the show to really dig its nails in.

Surrealism is hard, keeping an audience engaged without a common language, narrative, or obvious theme is even harder. But sitting in perplexed but fascinated wonder is worth the effort. When you discard the traps of naturalism, the world quite literally unfolds Infront of you. Catch The Wedding if you want an evening of contradiction and creased meaning. Now if you would excuse me, I must plan my mini break to Ipswich, hopefully, there’s a mime festival I can hit in the same week. Hello, new leaf, ready to be flipped?