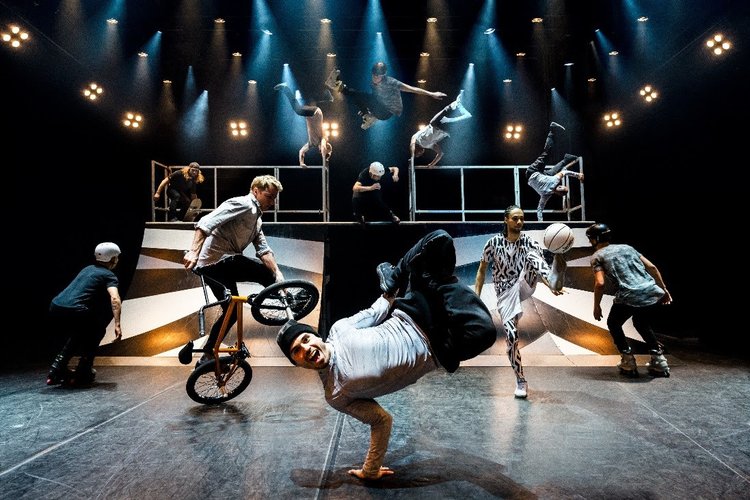 “Energy” is a word thrown around a lot nowadays when talking about theatre. “He energetically remained static during the fight scene, her energy during the monologue was outstanding”. Energy: overused and under-appreciated…however ISH Dance Collective under the direction of Marco Gerris have resurrected energy into its good old-fashioned format. a blood-pumping, head-spinning, leg kicking good time.

Jerry Beckers’s set is simplistic in theory but flexible in practice. Like the skate park under the Southbank centre appeared on stage the towering cliffs of ramps are pushed (a little clankingly but still smoothly) into different positions, locking in place (thankfully). Then flipped over in a second exposing a jungle-like cityscape of bars and frames for the parkour work. Like a Swiss army knife, it blends the different soloist’s worlds together bringing some form of cohesion to the piece.

This show is effectively the thing that killed the circus. Dramatic statement I know but hear me out. Long ago we would drive to the suburbs and file into a tent that smelled of fried food and gasoline from the mini-generator and watch a man terrorise animals. Shockingly this has fallen from favour and what has replaced it is variety dance, acrobatic, and freestyle shows. Crowd pleasers with the required whiff of disaster and death to get your heart beating but in a nice central London location… with the bonus of a bar (for the adults of course).

In that vein, ISH Dance Collective is way ahead of the game. Bringing together some amazingly talented dutch people for an evening as exhilarating as a ride at Alton Towers, but with far less required movement from us the punters.

The star of the show is undoubtedly 10 times Dutch BMX Champion Dez Maarsen. Ballet on wheels, his ability to manipulate his mount to allow spins and flips, grace impressive for anyone never mind a human balancing on a BMX. Cellist Annie Tangberg and violinist Vera van der Bie also give this show a unique feel. It would be easy to use thumping dance beats or top 20 songs for a family-friendly feel but that is too simple for Gerris. Let’s have two string performers giving their heart and soul, rocking out and riffing off one another, pushing the boundaries of what can be accomplished by string players.

Jelle Briggeman and Sven Boekhorst fly up and down the ramps, flipping, switching lanes, snatching balls from other performers, and gliding along the rails on their inline skates. Pim Wouters tries to keep up on his skateboard although never achieves the same level of almost inhuman fluidity.

“The flying Dutchman” (Bart Van Der Linden) and Luís Alkmim are the leopard-like free runners, flinging themselves through the tangle of bars and diving over the pommel horse in a lovely section of gymnastics. But what would a variety show be without some juggling? Michael Van Beek provides this with a foot/basketball twist, showing amazing concentration.

The only small negative takeaway is the issue of continuity. Without a narrative, it is hard to make these solo acts, all masters in their fields, fit into an overall show/message. The live music, laddish camaraderie, and humour are an attempt at this. An example is Arnold Put, Dietrich Pott, and Thomas Krikken. All gifted breakdancers/freestylers but their group choreography show a lack of ensemble mentality as they fall out of synchronisation at points.

But do you go to the circus for the opening dance number? No. You go for the skill, and that is what’s on offer at The Peacock currently. A show for adults and their small clones, old and young crones alike. A rare evening that will bring a smile to any human no matter the size of their brain or heart. I mean who could not enjoy spinning bicycles, juggling, breakdance, and on-stage acrobatics on rollerblades?. For an evening that just doesn’t give up, Elements of Freestyle is a pretty safe bet, for the audience that is.